Gov. David A. Paterson announced on April 12, that the National Football League’s New York Jets have entered into a three-year agreement with SUNY Cortland with the option to extend two more years, establishing the campus as the site of its summer football training camp and attracting both economic activity and visitors to the central New York campus. 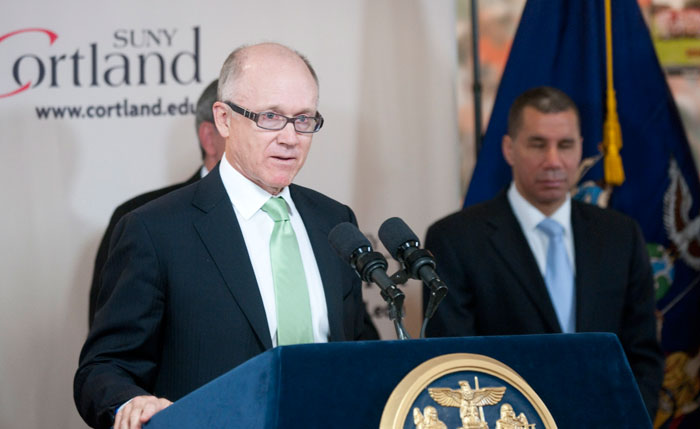 “Last year, Cortland laid the foundation for the Jets’ winning season. I am confident that the road to the Super Bowl will go through the same college town this season, garnering it the attention it deserves,” Gov. Paterson said. “I’m excited to welcome the Jets to Cortland not just for a single training season, but for a multi-year commitment that will benefit both the community and the campus to the tune of millions of dollars and doubling the first year attendance. Central New York is a beautiful region and I am thrilled we can show it off to football fans and their families alike.”

In 2009, the Jets moved their training camp to SUNY Cortland, whose location and excellent facilities met first-year coach Rex Ryan’s criteria for an ideal site. The Jets responded by winning their first three games in an 11-8 season that included their first AFC championship game appearance in 11 years.

The Jets summer camp, held in July and August each year, involves approximately 150 Jets players and staff and provides a significant economic benefit to the region, attracting tourism dollars and providing opportunities for SUNY Cortland students to expand their knowledge of sports management.

More than 34,000 spectators came to the SUNY Cortland Stadium Complex between July 31 and August 20, for an up-close view of the Jets players and coaches as they prepared for the 2009 season. The visitors also enjoyed interactive Generation Jets Fest activities, shopped at the Jets Store, and collected player autographs. The training camp generated $4.26 million in economic activity in Cortland County.

New York Jets Chairman and CEO Woody Johnson added, “As has been pointed out many times by our players and coaches, the chemistry and camaraderie established during our time at SUNY Cortland last year laid the foundation for what proved to be a memorable 2009 season. The school and surrounding community are gracious hosts and we look forward to continuing our relationship.”

“As a campus, we pride ourselves on preparing champions in the classroom, on the playing fields, and as graduates who make a difference in the lives of others,” said SUNY Cortland President Erik J. Bitterbaum. “From day one, we wanted to provide Coach Ryan and the Jets with the best facilities, service and support to achieve their goals last season. We were pleased to have played a part in the team’s exciting run to the AFC Championship game. They became part of our Cortland family. We look forward to working together with the team in the years ahead.

Empire State Development Chairman and CEO designate Dennis M. Mullen noted, “Having the Jets call Cortland home, while only for a few weeks each year, will provide millions of dollars to the regional economy, creating jobs and boosting tourism in this beautiful area. In fact, for every person directly employed by this project, nearly four more will find work indirectly supporting the Jets and the college. Even more, it will give the fans in Upstate New York the opportunity to see NFL-caliber players up close as they compete to make the team, as well as enjoy all that the surrounding region has to offer.”

In order to successfully host the Jets summer camp, SUNY Cortland will spend approximately $320,000 to create a second grass practice field, renovate a residence hall for coaches, upgrade the Student Union for use by the Jets and carry out related activities.

New York State’s Empire State Development will assist by providing SUNY Cortland with grants totaling up to $575,000, disbursed over a five-year period. The funds will partially defray the capital expenses and non-capital expenditures associated with the Jets summer camp. These funds will benefit SUNY Cortland and the surrounding community for years to come.

While the team will live, dine and practice in the same spaces as last year, planned capital construction on the Cortland campus will require the Jets staff and players to move their offices and team meeting sites to other campus facilities.

The team will report to SUNY Cortland for training camp on Sunday, Aug. 1, and the first practice will be held on Monday, Aug. 2. For more details, visit www.newyorkjets.com