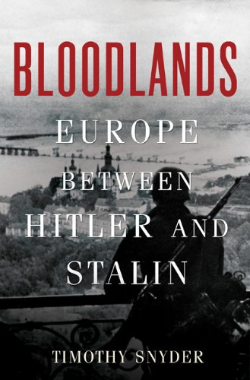 
A New York Times bestselling book that examines the close relationship of the mass exterminations led by Adolf Hitler and Joseph Stalin will be discussed by a four-person panel at SUNY Cortland on Wednesday, Nov. 2.

The event, part of SUNY Cortland’s Project on Eastern and Central Europe, is free and open to the public.

Bloodlands uses primary sources from victims such as letters, notes and diaries found on corpses to introduce overlooked episodes of mass killing. Snyder’s work, praised by The Economist and The New Republic as one of the most important works of 2010, offers a unique look at World War II and genocide in the 20th century.

“The book is unique in that it narrates two genocides as one event,” said Moranda, who instructs courses at SUNY Cortland related to European history. “It does this by focusing not on a political state such as the Soviet Union or Nazi Germany, but instead looking at a geographical region in Eastern Europe that Snyder labels the ‘bloodlands.’”

Snyder investigates the relationship between Hitler’s Nazi regime and Stalin’s Soviet forces and considers the motives behind both sides. Moranda said the author weaves two histories chapter by chapter.

“In doing so, (Snyder) casts light on the ways the Soviet genocide was not as different from Nazi atrocities as a person might guess,” Moranda said. “He even suggests that the two genocidal policies interacted with and fed off one another.”

Moranda and SUNY Cortland Distinguished Service Professor Henry Steck, who will serve as the panel’s moderator, both said the book emphasizes the magnitude of Polish and Ukrainian suffering during World War II and compares the hardships to those suffered by Jews during the same period.

“When we think about the bulk of the war, we always think of the Western front, the invasions of France and Italy and so on,” Steck said. “But Snyder says the real war was in the bloodlands.”

Steck said each of the four panelists brings a different area of expertise to the discussion.

Bhat teaches Russian history and regularly offers a course on the Stalin period. Gutman’s specialties include the Holocaust and recent Jewish history. Moranda specializes in German history. And Wasyliw brings knowledge of Russian and Ukranian studies.

Steck will provide context on Bloodlands during the discussion for people who have not read it. However, a copy of the book is available on reserve at SUNY Cortland’s Memorial Library.