Economics with a female face 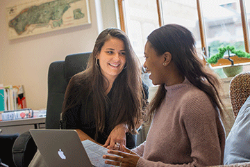 
Former U.S. Treasury Secretary Larry Summers, one of the country’s most prominent economists, gave a speech as president of Harvard University in 2005 suggesting women were underrepresented in science and engineering more because men had greater aptitude in those fields than due to patterns of discrimination and socialization.

“That gives you an idea of how the field of economics sees things,” said Flavia Dantas, Economics Department chair and an associate professor of economics at SUNY Cortland.

She provided that illustration to explain how the field remains largely a man’s realm in the United States.

The American Economic Association (AEA) in 2018 reported that only about a third of new Ph.D. candidates were  women — a number almost frozen for 20 years. And in 2016, females made up just 20 percent of tenure-track faculty, up from 13 percent in 1997.

But not at SUNY Cortland.

More than half, a full 57%, of tenured or tenure-track Economics Department faculty members at Cortland are women. The department demonstrates unusual ethnic diversity as well.

Out of the most recent six tenure-track hires, four were women, according to Dantas. The department now boasts eight females out of 14 full-time faculty members. That’s twice as many as when Dantas was hired in 2011.

The department can also claim unusual ethnic diversity. The national average measures 7.1% of full time, tenured or tenure-track positions in economics in the U.S. as belonging to historically underrepresented ethic groups. At SUNY Cortland, 35.7% of the economics faculty identify as an ethnicity other than white, Dantas said. Members come from Brazil, Bangladesh, India, South Korea and Peru, fostering a wealth of new ideas.

“I am not sure it attracts more students, but it is important for minority students to see themselves represented in the faculty,” Dantas said.

With 480 majors, the Economics Department boasts one of the university’s largest undergraduate programs.

“What we do very well that the rest of the country does not do is we are very open to plural approaches to economics,” Dantas said.

Cortland’s Economics Department faculty focus more on critical thinking in areas including women’s power in the home, the workplace and politics, as well as on economic factors involving race and class. The origin of this unusual emphasis, political economy, is credited to the late, very influential department chair, Gerald Surette.

“Gerry was someone with vision and he brought a lot of foundational people into the department that created a bridge between business economics and economics,” said Professor Lisi Krall, who joined the university in the 1990s and served as department chair in the late 2000s.

At Cortland, economics might be approached from angles such as the effects of debt on criminal justice, inequality, immigration and climate change, as the university’s most recent year-long university lecture series did in 2019-20. Frequent topics in classes have included Latin American development from different perspectives, contemporary issues in public policy and social justice.

Even students who aspire to become major figures on Wall Street have the freedom to explore the field widely.

“Our business economics degree has a lot of political economy, a lot of liberal arts,” Dantas said. “Our students have to have the ability to think critically.”

“I do a lot of interdisciplinary work and have always felt very supported, encouraged in my work,” said Krall, who teaches political economy of the environment.

But females striving to succeed in this “soft science” climb an even steeper uphill than those pursuing a career in the sciences, technology, engineering and mathematics (STEM) fields, Dantas said. Twice as many women work in those professions as become economists.

“The pipeline into economics departments has stalled for at least a decade, probably more,” said Shelly Lundberg, an economist at the University of California, Santa Barbara, and chair of the AEA’s Committee on the Status of Women in the Economics Profession.

Dantas can recall her own experience in 2011 as a Latina from Brazil who had just earned her doctoral degree from University of Missouri and was attending an AEA conference, traditionally central to academic recruiting in the field.

“I didn’t have a single interview that wasn’t all white males who were interviewing me,” she said.

“Then there was SUNY Cortland,” which sent two non-orthodox economists to do recruitment interviews. She spoke with Howard Botwinick, a now retired faculty member whose focus was Marxist economic theory, and German Zarate, a current associate professor born in Peru.

Dantas chose Cortland based on its diversity in faculty and economic philosophy.

“I think we need a good dose of imagination to solve the problems in our world and economics, done well, can solve that problem,” Krall said. “Students here get a broader education than they can get any place else.”

A strong mathematician while attending high school, Briah McLeod of Staten Island, N.Y., had already decided on business economics in 2016 when she came to SUNY Cortland. She was not surprised when she encountered Susanne Polley, an associate professor, at a department table during Spring Open House in Park Center.

“I never really thought of it that way, like she was a woman and in the Economics Department,” said McLeod, a senior who aspires to attaining an MBA in graduate school.

“Now women are standing out more in the economics field, and more women are getting into business, and the field is more oriented toward not just women but people from different backgrounds and communities,” McLeod said. “I think that’s a pretty great thing.”