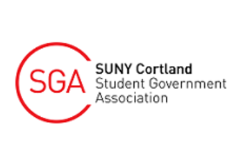 Recently elected as SUNY Cortland’s Student Government Association president, Humphrey had prior experience in government as treasurer her sophomore and junior years at Fayetteville-Manlius High School.

“I got a taste of student government in high school but I took a step back my senior year,” said the senior political science major from Manlius, N.Y.

“Coming into Cortland, it wasn’t what I thought I would do, but it just worked out that way and I’m really happy that it did.”

Excited to get involved on campus and be a part of something, during her first year on campus Humphrey attended an interest meeting for the Model UN Club. Other members of Model UN needed an SGA representative to go to Club Senate. All eyes turned to Humphrey when no one else volunteered to take the position.

After serving as Model UN club senator, Humphrey was appointed as an officer of SGA’s Executive Board. She also held titles including coordinator of student advocacy and chair of the Housing and Student Life Committee.

Humphrey has built relationships with numerous campus administrators, including President Erik J. Bitterbaum. She also served on the ASC Board of Directors and ASC Dining Director search committees, allowing her to develop connections with many of the executives from Cortland Auxiliary.

“My number one goal to ensure that every student knows what SGA is and feels like they are represented by the organization,” Humphrey said of her newest role.

“In the past, there have been a lot of students who don’t know we exist. So my mission this year is to make it so  that every student feels like we are someone that has their back and is going to advocate for them.”

With new limitations due to COVID-19, things are going to run differently for SGA this year, according to Humphrey.

Student government officers plan to rely heavily on virtual interactions. Upcoming events such as a virtual town hall meeting are being planned.

This will allow students to have the ability to ask questions about SGA or voice any concerns, she said. Stay tuned for more details later this semester.

Students are encouraged to follow @cortlandsga on Instagram to keep up with announcements and club events happening on campus.

Humphrey and other SGA officers will maintain regular office hours in the SGA office in Corey Union. Those times are posted online.

Hopefully, the initiatives SGA has been working towards will be fulfilled by the end of the year. These include implementing mandatory faculty diversity training, expanding mental health services, increasing parking availability, limiting the number of emails students receive, and revising catering policies.

When not focused on student government related work, members of the campus community can find Humphrey playing violin in the College-Community Orchestra or watching her favorite TV show, “Jeopardy!”

She is applying to go into the Peace Corps after graduation and hopes to get involved with international relations and politics. Her experience with Model UN. All the things she did in SGA will help her on her next step in the future.

“I want to stress that if people have any issues or if they just want to talk, to feel free to reach out at any time,” Humphrey said. “We are really just trying to make sure our students understand that we’re available and we work for them.”