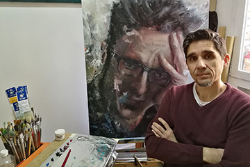 
The words “graphic novel” conjure ideas of fights to the death between good and evil by masked superheroes in colorful spandex.

However, the medium also serves to deliver socially important messages to the worldwide masses through that universally understood language of pictures.

Such is the work of Spanish painting and drawing artist and scholar Juan Gallego, who will give an artist’s guest lecture about his forthcoming graphic novel, The Plague, and will discuss how that relates to the immigration tragedy in the Mediterranean Sea, on Friday, Sept. 27, at SUNY Cortland.

An associate professor who teaches painting techniques and illustration at Universidad Rey Juan Carlos in Madrid, Spain, Gallego will begin his hour-long presentation at 9:30 a.m. in Dowd Gallery, located in the Dowd Fine Arts Center.

Presented by the Art and Art History Department, the talk is free and open to the public.

He is the author of several published comic book short stories. In November 2018, he released a graphic novel, Como si Nunca Hubieran Sido (As if They Had Never Been), about the tragic death of immigrants in the Mediterranean Sea. Currently in its third edition, that work was awarded at the Splash Sagunt ComicCon in Valencia, Spain, and has been presented in many different cities of Spain.

He has exhibited his artwork in solo, two-person and group exhibitions. His illustrations have appeared in numerous national and international galleries, venues and art fairs in Spain, China, Colombia and South Korea. In Madrid, Gallego’s work has appeared in Galeria Fernando Pradilla, Galería Santiago Echeberria, Galería Gema Lazcano, the Contemporary Art Fair in Madrid, and ArtMadrid.

He also is the author of several published comic book short stories.

The event is sponsored by the College’s Cultural and Intellectual Climate Committee (CICC), the Art and Art History Department, the Campus Artist and Lecture Series, the Provost and Vice President for Academic Affairs Office, the Research and Sponsored Programs Office, the President’s Office and the Cortland College Foundation.

The lecture also is made possible by a grant from the SUNY Conversations in the Disciplines, which supports the CICC’s yearlong interdisciplinary series on the theme of “Debt,” which is exploring a wide range of issues spanning criminal justice, inequality, immigration and climate change.

For more information about the talk, contact Szilvia Kadas, SUNY Cortland assistant professor of graphic design and digital media, at 607-753-4190, or visit her website.

For more information on the CICC’s “Debt” series or to submit an event, make a Field Guide contribution, or volunteer to support this year’s activities and programming, contact Ben Wilson, assistant professor of economics, at 607-753-2436. Stay current with the series news on Twitter at @SUNYCortCICC.