Christina Garcia ’20 knew she wanted to return to Spain after studying abroad in Madrid changed her life as a SUNY Cortland student.

A prestigious cultural exchange program will help her achieve that goal this summer.

Garcia recently earned an English Teaching Assistant Award through the Fulbright U.S. Student Program, meaning she will spend the 2021-22 school year teaching abroad. The former dual major in childhood/early childhood education and Spanish will be placed in La Rioja, a province in northern Spain.

“When I first applied, I thought the chances were small that I’d actually get it,” said Garcia, who earned one of approximately 180 grants out of more than 700 applications. “I’m still feeling excitement, some disbelief and a lot of pride.”

Since graduating in December, Garcia has taught as a temporary replacement in a Foreign Language in the Elementary School (FLES) classroom in the Suffern School District, near her hometown of Sparkill, N.Y., in Rockland County. She said the position will be difficult to leave, but it’s a job that has prepared her well and affirmed a future in education. 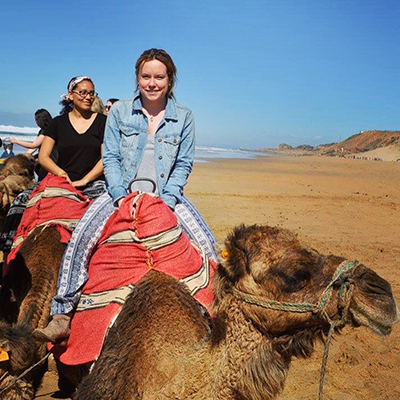 Through the Fulbright program, Garcia will teach multiple subjects in English to school-aged children who are bilingual.

“I can’t emphasize how useful it is socially and professionally to learn another language,” she said. “I’m just so happy that I’m able to help others learn a different language both here and abroad.”

Garcia also gained valuable experience in Spring 2018 when she first traveled to Spain for semester-long study in Madrid. She grew close with the family that housed her, including her host mother’s 10-year-old grandson. He needed extra help in English, so Garcia served as his tutor.

“It was eye-opening,” she said. “I found myself spending extra time studying his notes and his books because the English language is very hard to learn and teach to a non-native speaker.”

Despite the learning curve, Garcia relished the opportunity.

She joked that she learns best through challenges. For instance, during her study abroad trip, Garcia opted not to purchase a SIM card for her smartphone, meaning that she could only use its most helpful features where wireless internet was available. Navigation was difficult, but Garcia mastered directions and other skills because she was forced to ask for help and immerse herself in the culture.

“I came back a more outgoing person — just more confident in myself and my abilities,” she said.

In addition to working as a teacher during the Fulbright experience, Garcia said she is expected to be a cultural ambassador. Funding will cover travel expenses and a monthly stipend as well as a community engagement program that Garcia will lead. She plans to start a volleyball club in La Rioja, a region that’s well-known for its wine production.

She said that her love for learning about different cultures dates back to her childhood, when family vacations prioritized seeing the world through travel to places as far away as Ireland, Mexico and Tanzania. At 22 years old, she already has visited more than a dozen countries. Two of her three older siblings reside outside the U.S., including her sister in Guatemala and her brother in Zambia.

“I think traveling is important because you get to see how the rest of the world works outside of your tiny little corner,” Garcia said.

In addition to providing access to a life-changing study abroad trip, Garcia credited her SUNY Cortland education with improving her skills and deepening her interest in the Spanish language. She credited several faculty members in the Modern Languages Department who assisted her Fulbright application, including Professor Christopher Gascon, Associate Professor Colleen Kattau and Professor Wes Weaver.

Garcia’s Cortland training also helped her become a better teacher, especially a semester-long experience in the School of Education dedicated to being culturally and linguistically responsive.

Garcia said she will put her teaching and Spanish-speaking skills to use through the Fulbright award, and she’s open to everything that the future might hold — possibly a master’s degree in Teaching English to Speakers of Other Languages (TESOL) or extending her time teaching abroad.

“I love where I live, but I’m open to teaching anywhere,” Garcia said. “Especially diverse areas where I can help the needs of students.”