On September 14, 2020, Prof. Alexandru Balas gave a webinar presentation titled "Himalayan Rivalry: India-China Relations" via JioMeet to approximately 200 participants as part of an event organized by the A.V. Kamalamma College for Women, Davangere, Karnataka, India. This was the first international webinar organized by the A.V. Kamalamma College for Women in its 74 years of existence. The webinar was introduced by Prof. Shivaprakash P.S., Principal of the College, and Dr. B.P. Kumar, Associate Professor and Head of Department, History, and the vote of thanks was given by Dr. Anuradha P.M., Head of Department, English Department. The event was covered in several Indian newspapers including Vijaya Karnataka and Prajavani: 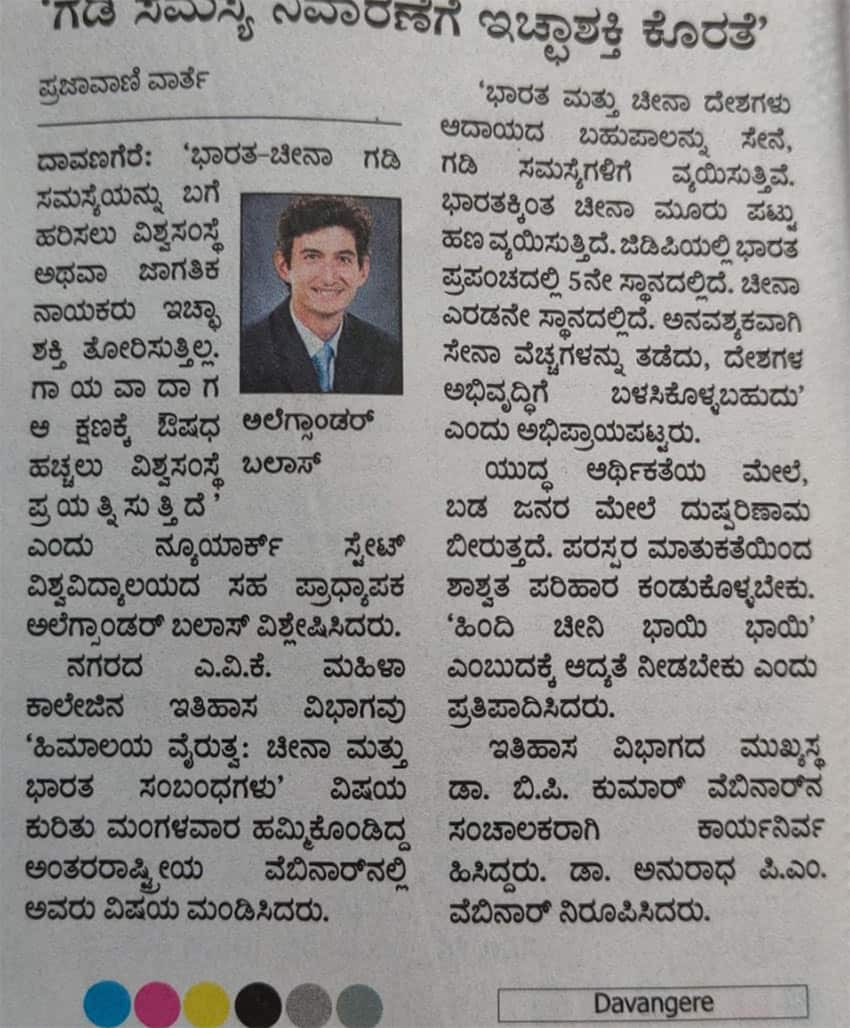 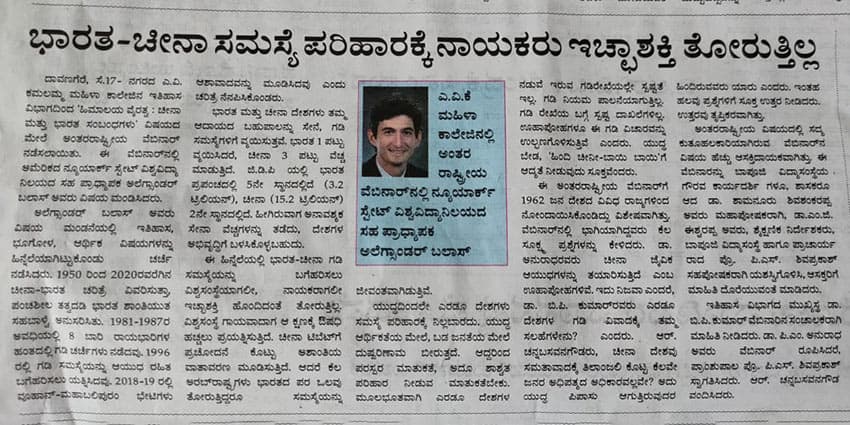 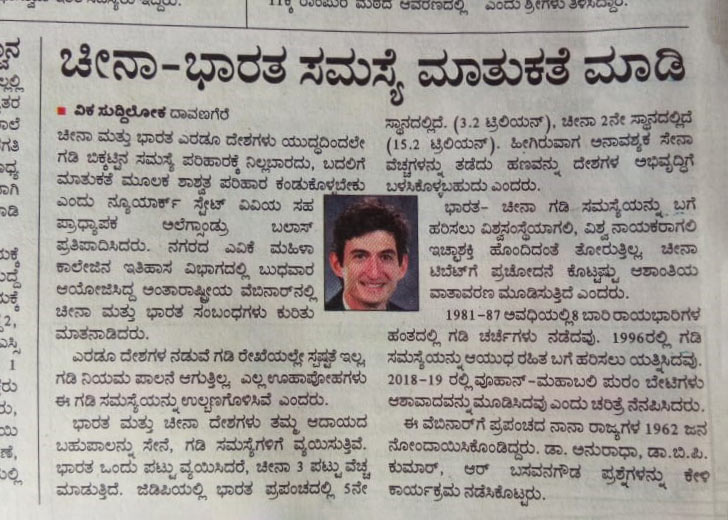 4th Annual European Union Day Keynote Address @ SUNY Cortland:
Brexit: In or Out? Implications for the EU, the U.K., and the U.S.

After years of acrimony between pro- and anti-EU forces in the British electorate, in 2016 Prime Minister David Cameron called for an “In/Out” referendum in which a majority voted to “Leave.” The UK has been expected to exit the EU on March 29, 2019, however PM Theresa May’s agreement with the EU for an “orderly” exit was soundly defeated by the House of Commons. The lecture begins with the “state of play,” followed by a deep dive into the UK’s history as the EU’s “awkward partner,” the different post-BREXIT scenarios, and implications for EU and US political and economic security.

The lecture is free and open to the public.

This event is part of the SUNY Cortland Sesquicentennial

Working as an International Diplomat 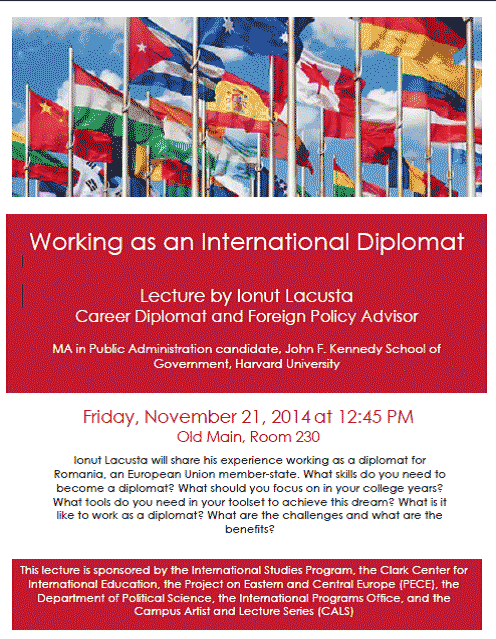 Working as an International Diplomat

Sponsored by the Clark Center for International Education, the International Studies Program, the Project on Eastern and Central Europe (PECE), the Department of Political Science, and the Campus Artist and Lecture Series

For more information about this talk, please check the press release here 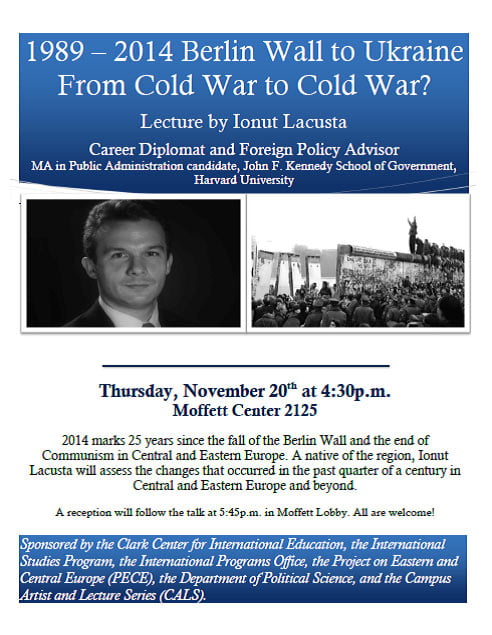 A reception will follow the talk at 5:45p.m. in Moffett Lobby. All are welcome!

Sponsored by the Clark Center for International Education, the International Studies Program, the Project on Eastern and Central Europe (PECE), the Department of Political Science, and the Campus Artist and Lecture Series

For more information about this talk, please check the press release here 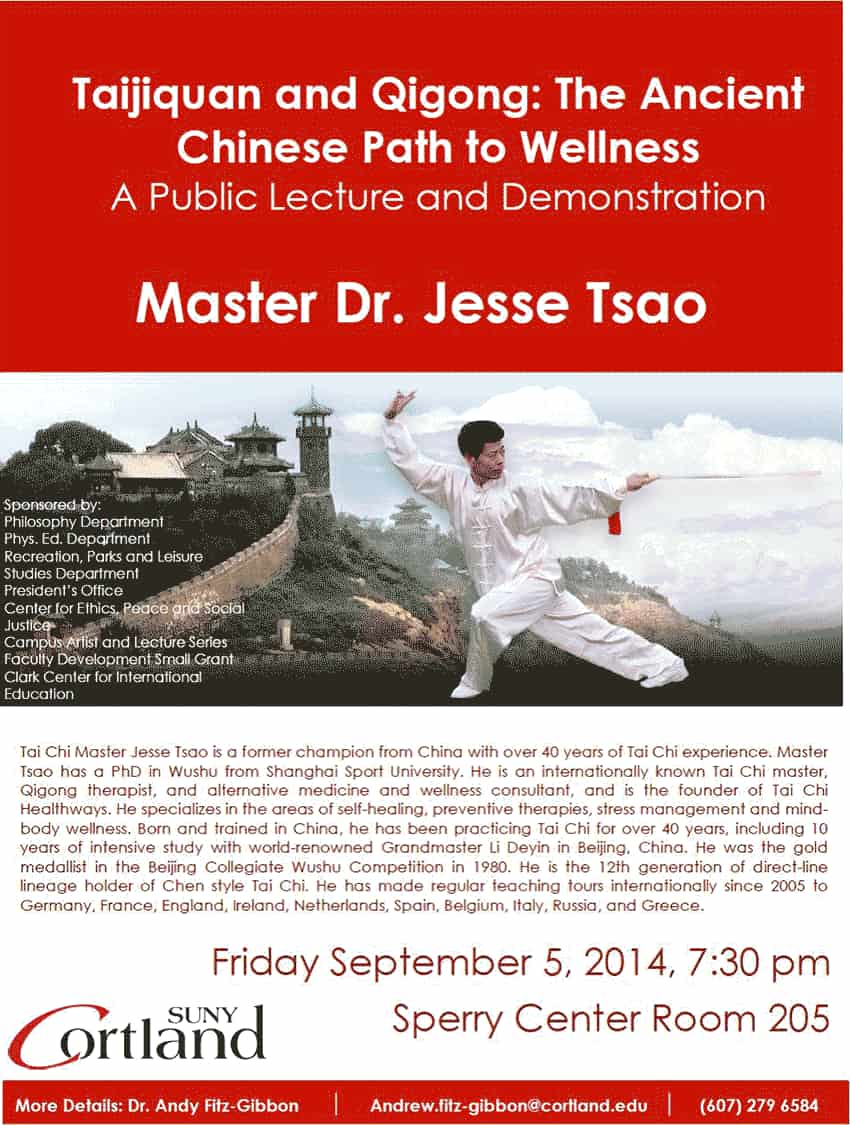 Tai Chi Master Jesse Tsao is a former champion from China with over 40 years of Tai Chi experience. Master Tsao has a PhD in Wushu from Shanghai Sport University. He is an internationally known Tai Chi master, Qiqong therapist, and alternative medicine and wellness consultant, and is the founder of Tai Chi Healthways. He specializes in the areas of self-healing, preventive therapies, stress management and min-body wellness. He has made regular teaching tours internationally since 2005 to Germany, France, England, Ireland, Netherlands, Spain, Belgium, Italy, Russia, and Greece. 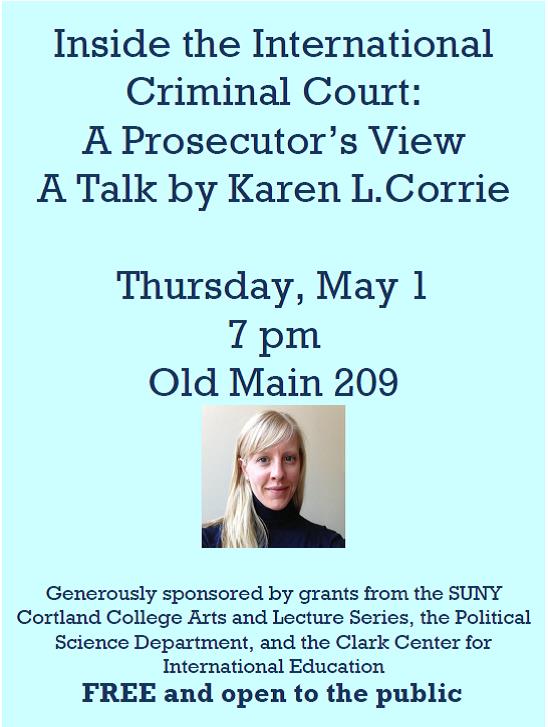 Sponsored by:  The Political Science Department, The Clark Center for International Education, and the SUNY Cortland College Arts and Lecture Series 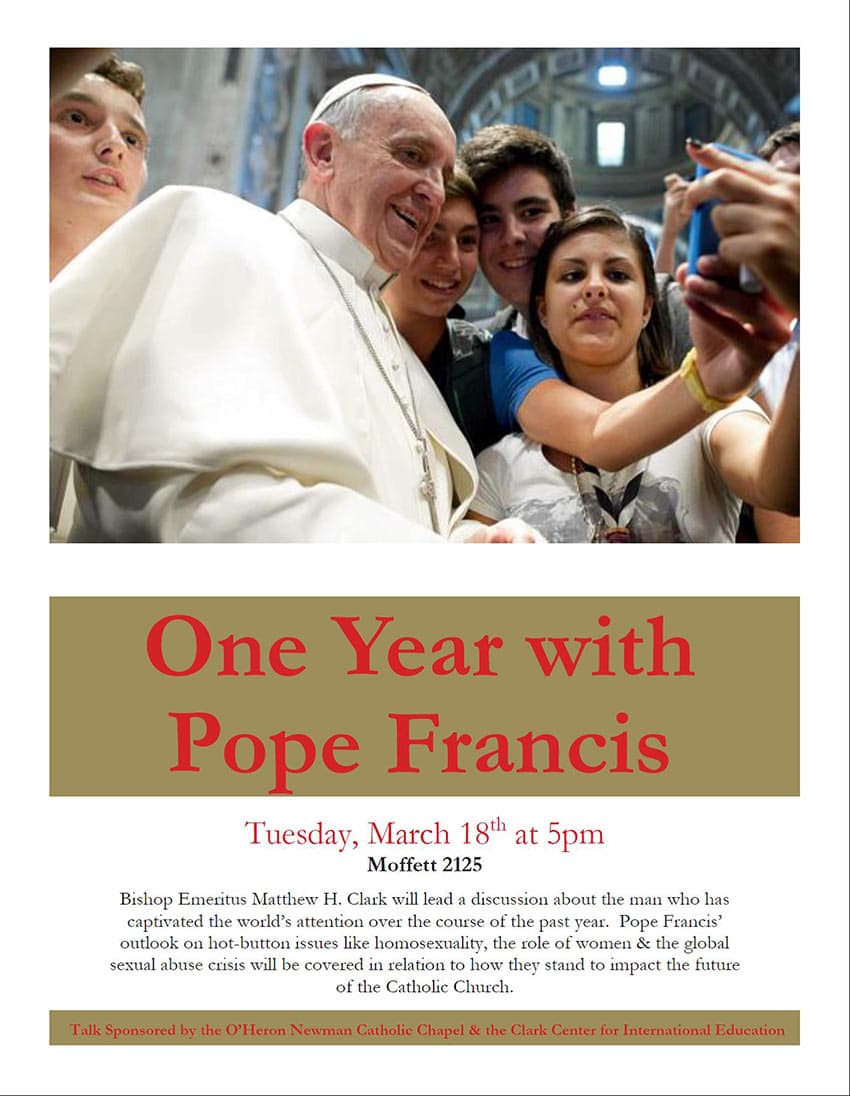 On Tuesday, March 18th starting at 5pm in Moffett 2125, Bishop Emeritus Matthew H. Clark will lead a discussion about the man who has captivated the world’s attention over the course of the past year.  Pope Francis’ outlook on hot-button issues like homosexuality, the role of women & the global sexual abuse crisis will be covered in relation to how they stand to impact the future of the Catholic Church. 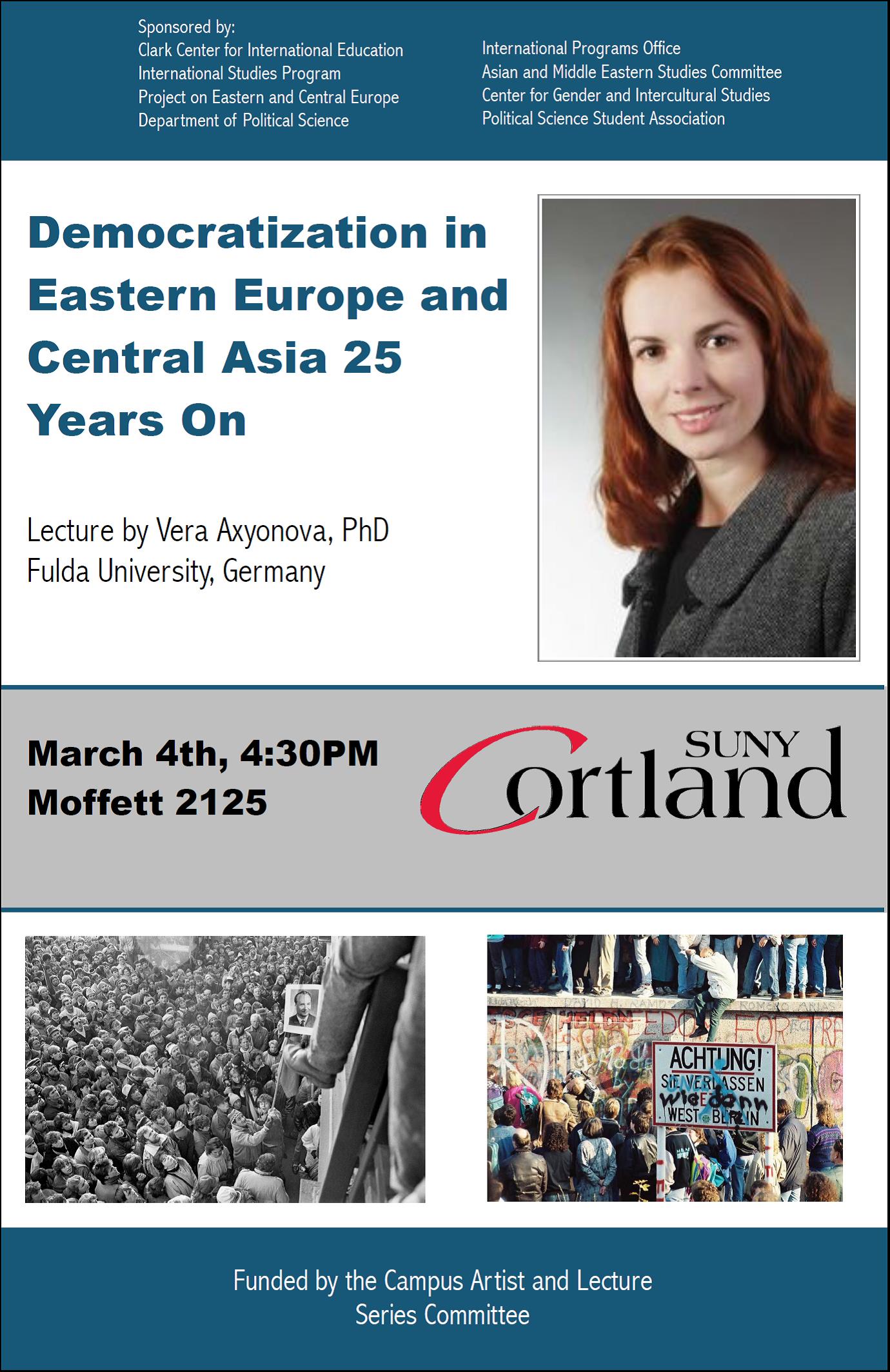 Join the Clark Center for International Education in welcoming scholar and expert, Dr. Vera Axyonova, for her lecture “Democratization in Eastern Europe and Central Asia 25 Years On.”

Dr. Axyonova, of Germany’s Fulda University, will be discussing on the historical process of democratization in Central European, Eastern European, and Central Asian Countries that occurred after the fall of communism in 1989.

We hope to see you there! 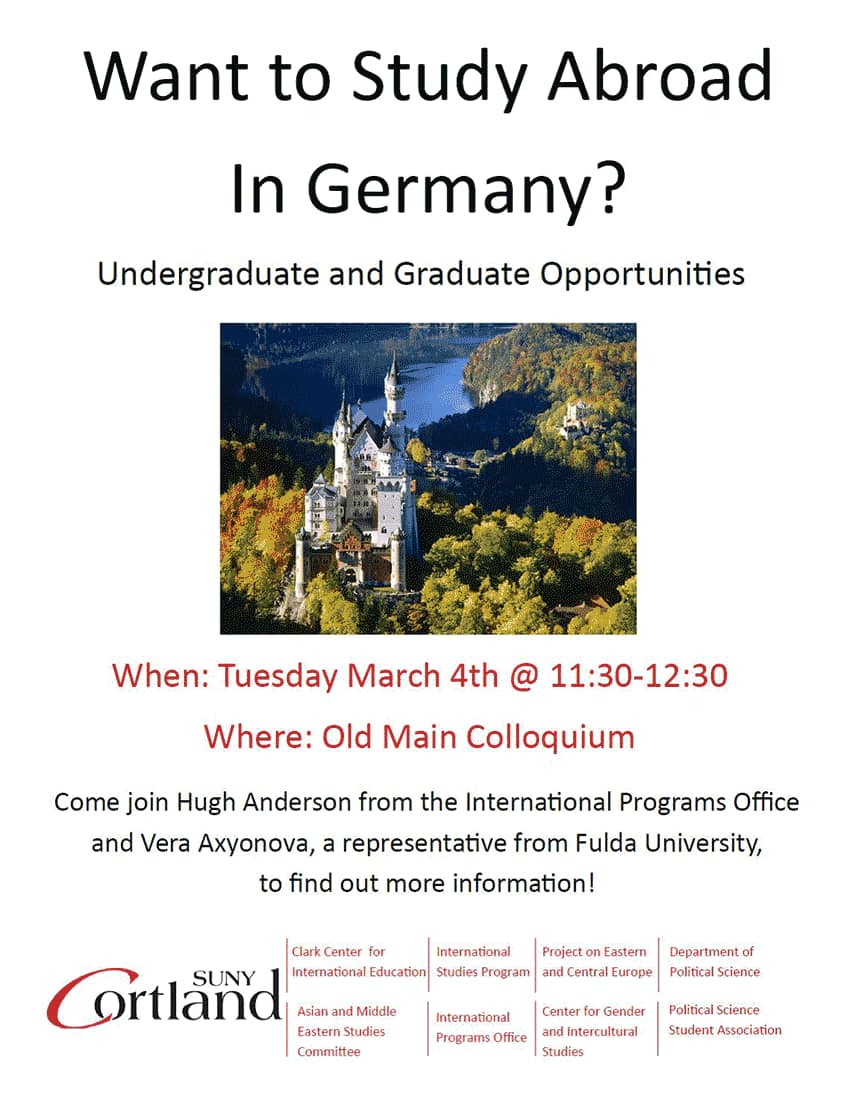 Are you an undergraduate or graduate student who is curious about studying abroad?  Would you like to learn more about German culture, language, and customs?  Well here is your chance to hear about SUNY Cortland’s partnership with Fulda University directly from a Fulda representative visiting our campus.  Come to this talk to get a sense of what this opportunity would mean for you financially, educationally and otherwise! 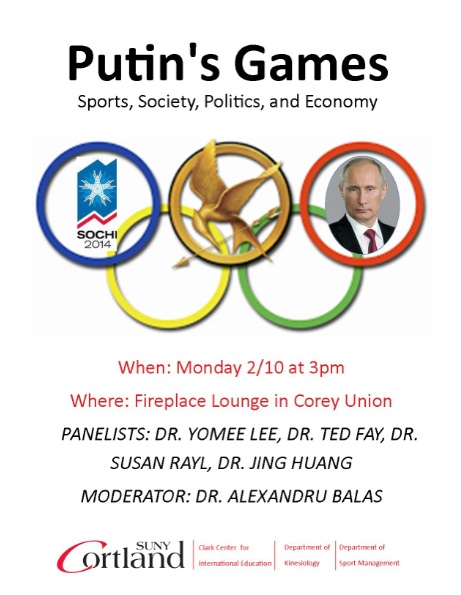 Interested learning about what goes on behind the scenes during the Olympics? Come to the Clark Center for International Education’s event “Putin’s Games: Sports, Society, Politics, and Economy.” It will be held on Monday, February 10th at 3 PM in Corey Union’s Fireplace Lounge. Panelists Dr. Yomee Lee, Dr. Ted Fay, Dr. Susan Rayl, and Dr. Jing Huang will be discussing issues that stem from the Olympic Games. Dr. Alexandru Balas will be moderating the event. The Clark Center for International Education, the Department of Kinesiology and the Department of Sport Management are the sponsors of this event.

We hope to see you there! The Impact of the Free Trade Treaty, GMOs, and Seed Banks on Farmers in Guatemala
November 13, 2013 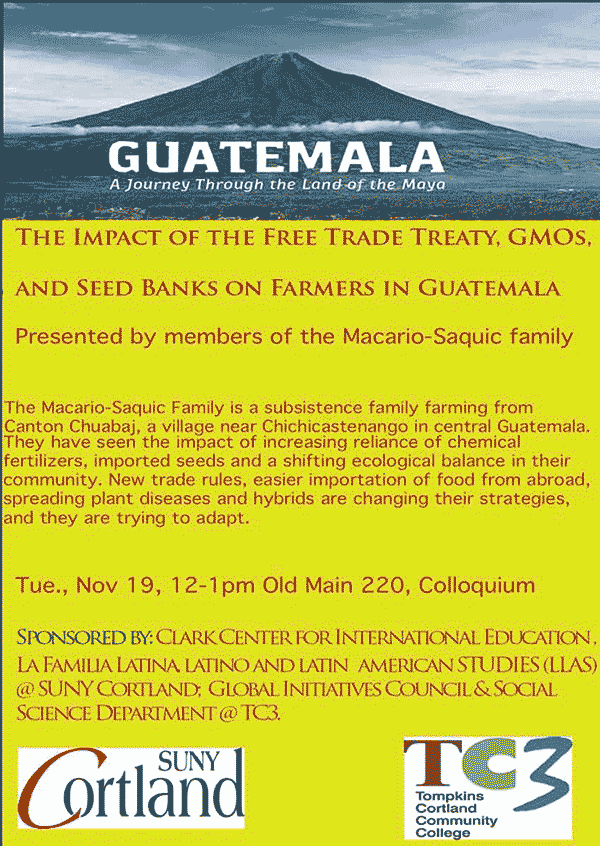 Food Security, Farming, the WTO and CAFTA.  As a necessary element to human survival, food is a human right. Small, local family farms are the bedrock of traditional rural communities and global food security- the ability of countries to produce the food they need to survive. Yet the global food supply is increasingly falling under the control of giant multinational corporations. Large agribusinesses have rewritten the rules of the global agricultural economy, using “free trade” agreements to turn food into a commodity for profit rather than a human right. What is the impact of CAFTA on local farmers’ lives in Guatemala? How do all these global agricultural policies impact the daily lives of farmers in Guatemala? 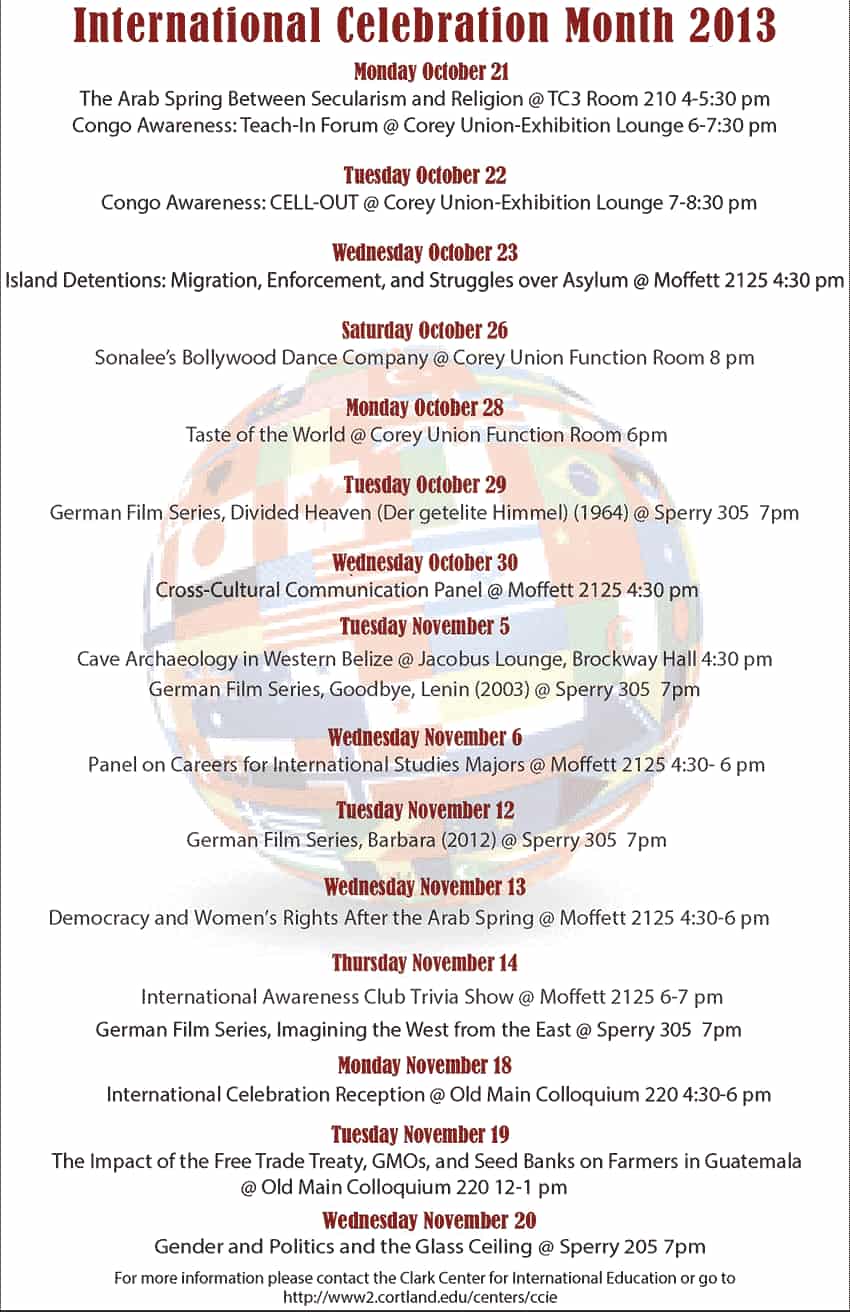 The Impact of the Free Trade Treaty, GMOs, and Seed Banks on Farmers in Guatemala @ Old Main Colloquium 220 12-1 pm

To Smash the Ceiling or to Build Open Houses: Gender Politics and the Glass Ceiling @ Sperry 205 7pm

The panel "Conflict in Syria: How Should the U.S. Respond?" co-organized by the Clark Center for International Education was featured in the local media