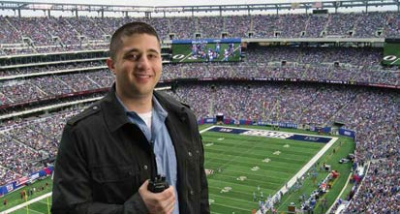 "Cortland was phenomenal preparation for me. My professors were extremely influential, always urging me to get experience on my résumé. It all comes down to basics, and those basics I learned at Cortland."

“You live and breathe for game day,” Mike says. “When you’re on the field and the sound of 80,000 cheering fans hits you, it’s incredible.”

For Mike, a sport management major, nothing compared to the intensity of game day. As coordinator of events and game operations for the New York Jets, Mike had to see that everything from the national anthem to the halftime show to postgame interviews went off without a hitch.

The Jets may not have reached the Super Bowl during the years Mike worked for them, but when game day went perfectly, Mike could feel like a champion.

Two things helped Mike, a lifelong Jets fan, win this dream job. One was luck. The brother of someone his mother knew, knew somebody who knew somebody whose cousin worked for the Jets. The second was his Cortland education. Impressed with his degree and experience, the Jets wanted him on their team.

“Cortland was phenomenal preparation for me,” says Mike, who as a student worked as events manager for the Cortland Athletics Department. “My professors were extremely influential, always urging me to get experience on my résumé. It all comes down to basics, and those basics I learned at Cortland.”

Always looking to strengthen his team — and to jump start the careers of promising Cortland students — Mike makes a habit of working with student interns, and even has hired one to a full-time job.

He left the Jets in the winter of 2010 for a new position as manager of event operations for the recently built MetLife Stadium. The 82,500-seat stadium is home to the Jets and New York Giants as well as the venue for international soccer matches, rock concerts and more.

On the horizon is the granddaddy of all game days. “We host Super Bowl XLVIII in 2014,” Mike says. Preparations are already under way.