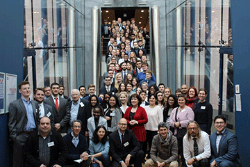 
With travel restrictions and quarantine changing life as we once knew it, seemingly everyone around the world has lost something they once looked forward to.

For a group of SUNY Cortland international studies majors, the COVID-19 pandemic has changed not only their perception of global affairs but their plans for the future.

Senior Kelsilyn Norman of Binghamton, N.Y., and sophomore Melissa Alvisi, who holds dual citizenship between the U.S. and Italy, share unique dreams of putting their SUNY Cortland diplomas to use for foreign agencies overseas.

The two students joined six others from campus who traveled to Brussels, Belgium, in January during winter break for SUNY Cortland’s recent Model European Union participation with students from diverse universities in the U.S. and abroad. At Cortland, the one-credit course allows students to learn more about the EU and how it functions through simulated negotiations and agenda proposals.

“The class preps us about the European Union and what it’s all about,” Norman said. “It’s not just Cortland who does it. There are a couple of SUNY schools, a couple of non-SUNY schools and several European universities that take part as well.”

“The conference made me realize how hard it is to make those decisions,” Alvisi said. “Even if it was just us students, it took us three days to just go over one point of the agenda. That showed how tough it was.”

Now, the students can’t help but wonder what their future may hold as the joyous, recent experience now seems like the distant past.

“The world is really going to change,” Alvisi said. “Even something like a conference such as what we did in January or the European Union commission reunions, they’re not going to be the same because they’re going to have to respect social distancing.”

In terms of the coronavirus’ effect on the European Union, Norman believes differences in wellness across member nations will cause problems to surface in the near future.

“The EU right now seems to be on the same page with a lot of things,” she said. “Preventative measures, the travel restrictions, the lockdowns, etc. But there will be a problem when we have countries that are totally fine and countries that are still suffering. It’s similar to what’s going on here. Even though our country’s not on shut down — if they decide to open back up because West Virginia, Nebraska and Oklahoma are doing OK — California, New York and New Jersey wouldn’t be able to do that yet.”

Alvisi was studying abroad in Sevilla, Spain when the coronavirus began rapidly spreading in February.

“It seemed like nobody in Europe cared at all,” Alvisi observed. “I was more sensitive about it because my family was quarantined in Italy, but while in Spain people were still partying and going places. Everything was still open, and people weren’t caring about a country that was so close to them.”

Fearing that President Donald Trump’s travel ban plans would strand her in Sevilla, Alvisi faced a difficult decision once her semester abroad hit a fork in the road.

“I couldn’t even fly back to Italy from Spain because they weren’t doing any flights,” she said.

“My options were to stay in Spain or wait until Italy’s borders were opened. I decided to fly back to the U.S. when I heard that Trump was closing the borders. I was scared he was going to close the borders to U.S. citizens, too.”

Norman understands the need for the travel shut down and thinks it’s the smartest thing to do right now.

“So much of the world right now has chosen to shut down, and I think that’s great that that’s happening from my own perspective on the health issue,” she said.

Norman is convinced that the relationship between the U.S. and the EU will one day flourish as it once did.

“There have definitely been some rising tensions, between the U.S. and the EU, and I think that a lot of the heads of government within the EU understand the situation, that this is not necessarily American policy but rather it’s just the current state of the political climate here,” Norman said. “Once this climate changes a bit we’ll see things a bit more back to normal with the EU.”

But as days in quarantine continue to slowly pass by, the students wonder if they’ll feel that sense of “normal” anytime soon.

Alvisi, who was using her semester in Sevilla to improve her Spanish language skills, now must adjust her plans to cooperate with the world’s current situation, even if that means not studying abroad until the COVID-19 dust settles.

“I saw it as an opportunity to become proficient in a third language,” Alvisi said. “My Spanish definitely got better, but it was only for six weeks.

“I think I’m either going to study abroad again or take some advanced course for Spanish at some point maybe this summer.”

Upon graduating from SUNY Cortland with degrees in international studies, French and Spanish, Norman planned on moving to Paris, France this summer to begin her graduate program.

Now, she’s eagerly waiting to hear from Sciences Po, the Paris school of international affairs, about earning her master’s degree in international security.

“The program I’m in accepts so many international students, they have to decide on whether or not we can come to France and study,” she said.

Despite these unforeseen circumstances, Norman is optimistic the global pandemic will leave a planet full of helping hands.

“This is a moment where a lot of the world has come together. A lot of us are on the same page,” Norman observed.

“We’re shut down, supporting each other whether it’s on social media or supplying aid with PPE’s or ventilators or whatever it may be. Throughout the world we’re sending those, sending test kits, and helping each other.

“That reinforces how we really are a global community.”