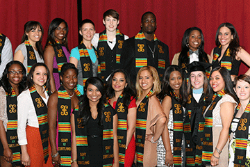 
Since 1994, SUNY Cortland has celebrated the achievements of graduating seniors who have embraced their own and the campus’ diversity with the Kente Ceremony.

The Kente Ceremony, which in recent years has grown rapidly in popularity and attracted around 100 participants, takes its name from the Kente stole each student is awarded. The fabric itself acknowledges the students who are transitioning to the next chapter of their lives. The ceremony also honors individual students and staff who set positive examples in supporting inclusion on SUNY Cortland’s campus.

Traditionally from Ghana, the colorful yellow, red, green and black cloth offers students a connection to the rich African academic heritage. Often parents and friends travel long distances in April to participate in their graduate’s big day of hugs, pictures and warm memories. In May, seniors of all ethnic backgrounds proudly also wear their Kente stoles during Commencement each spring.

Since data was first collected on the ceremony in 2002 through this year, more than 1,019 students have accepted the academic honor.

However, this year’s group of Kente graduating seniors won’t be celebrating like the classes before them. In response to the COVID-19 pandemic, involving the closure of campus after spring break, the annual celebration originally scheduled to take place on the weekend of April 25-26 was canceled.

Though the class of 2020’s Kente stoles are being distributed by mail, what they’ve achieved won’t go unrecognized.

Miriam Hulede, a senior from New York City studying international studies and Africana studies, was this year’s recipient of The Calvin Louis-Juste Memorial Award. The award honors a student who reflects the leadership qualities of the late Louis-Juste, a 2009 Haitian American graduate who died in 2011.

First introduced last year, the award is given to a student from a multicultural background who shows commitment to leadership, community service, and promoting equality.

As a peer mentor and diversity trainer with SUNY Cortland’s Multicultural Life and Diversity Office, Hulede made the university’s campus a welcoming space to everyone she met.

Originally born in Accra, Ghana, Hulede said she is honored to be receiving such recognition.

“I’m leaving physically but I’m also leaving behind some sort of a legacy for most people of color,” Hulede said.

“That’s a great feeling. Knowing that even though I’ve left I will still be remembered.

“People will look up at that plaque and remember me.”

Senior Alliyah Dookie was named as the recipient of the inaugural NAACP Award, which honors a student who promotes diversity, inclusion and social justice in support of the Black community.

As the diversity intern in SUNY Cortland’s International Programs Office, Dookie was recognized as an essential member of both the Women of Color club and the Cortland chapter of NAACP. More about Dookie and this year’s SUNY Cortland NAACP Award is included in this Bulletin.

Carr was identified by his students as an ally for people of all backgrounds to turn to when in need. He has supported those who fill the seats of his COM 201 class, devoting time to the constant pursuit of social justice.

Kaltefleiter has demonstrated a commitment to integrating issues of race and class into every course she teaches. Through the university’s radio station, she’s provided a platform to speak and create discussion about problems stemming from inequality.