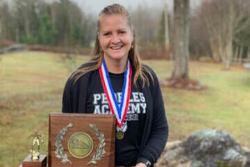 
Angie Codella Faraci ’95 has never been one to back down from a challenge.

That tenacious attitude made her one of SUNY Cortland’s top defenders on the soccer field from 1991 to 1994, including the team’s NCAA Div. III national championship team in 1992.

Faraci was ready for a new challenge in 2016 when Peoples Academy high school in Morrisville, Vt. needed a new varsity soccer coach.

Faraci had been coaching and teaching physical education since she graduated from SUNY Cortland. She led the women’s soccer team at Johnson State College, now Northern Vermont University, for three years. Faraci had 13 years of experience with the Nordic Premier Soccer Club in the Burlington, Vt. area, had spent a decade coaching middle school girls’ soccer teams in Vermont on top of six years leading the girls’ varsity program at Johnstown (N.Y.) Junior-Senior High School shortly after leaving Cortland.

Coaching the boys, however, was going to be something new.

She faced some sexist comments, which grew tiring. Officials would see a woman get off the bus with a boys’ soccer team and ask, “Where’s the coach?”

Faraci also had to learn the psychology of teenage boys and how to motivate them. Part of her strategy was leaning into their competitive nature and making every drill in practice a contest. She also started a goal-setting ritual in which players would write on a card about a specific thing they wanted to achieve in that day’s game. Faraci would hand the card back with comments and guide their growth in the cerebral part of soccer.

It all came together for the Peoples Academy boys and Faraci on Nov. 7 when the team beat Green Mountain, 1-0, in Vermont’s Division III state championship game. She is the first woman to coach a boys’ team to a state title in Vermont history.

While it was a relatively muted celebration for the team immediately after the game — COVID-19 restrictions meant only 75 fans could attend in person — Faraci knew something was up when the bus pulled over at the Morrisville-Stowe State Airport just south of town on the trip home.

A convoy of emergency vehicles escorted the bus to Upper Main St. before the team disembarked for a parade back to the school.

“There’s the firetrucks and police cars and in the middle of town there is an intersection where we got out and walked 250 yards or so to the school,” Faraci said. “The town was lined with people. It was very cool. It was such a great experience for the boys.”

Faraci spent 17 years teaching middle school physical education at Browns River Middle School but she moved to a similar role at Peoples Academy Middle Level school one year after taking over as boys soccer coach in the same district.

It was an opportunity for her to bring new methods of physical education to a school that had been mired in outdated programming.

“I did introduce a pedometer program with syncable pedometers,” she said. “All of the students would rush into the gym, pick up a pedometer and put it on their waist. All the organized five minutes of quick introduction activities, they were doing. And I don’t have the behavior problems. It all turned around. These kids are busting to get 3,000 steps per class and they’re so excited.”

Her peers have taken notice. Faraci received the Society of Health and Physical Educators (SHAPE) of Vermont’s Distinguished Service Award in 2018. The award goes to a teacher who has excelled over time in contributing to the health and physical education profession.

Faraci’s passion for the job started during her time in the classroom at Cortland.

“The professors that I had at Cortland and the experience I had there in all of my PE-related coursework was excellent,” she said. “I was so prepared to start teaching. The foundations that they provided were exactly what I needed to be a professional in this area. And the ties to belonging in professional organizations and standing up for your career are really deep-rooted in the Cortland society.”

She also enjoys working with student teachers and paying forward those lessons to the next generation of physical educators.

Faraci leaned on her experience of motivating students when it came to rebuilding the boys’ soccer program. She found that some of the things that had worked coaching girls clicked with the boys as well.

“I’ve always made stickers with a motivational quote,” she said. “I’ve done that for every team I’ve ever coached, girls and boys included. I wasn’t sure how the boys would like it, but they’ve begged me for those silly stickers. There are some things you wouldn’t think would translate but they have just as well with the boys.”

Talking about her playing career at SUNY Cortland also resonated with this fall’s team at Peoples Academy. Faraci was a freshman in 1991 on a Red Dragons team that saw its season end in the NCAA Div. III quarterfinals. That loss drove her and her teammates to a 17-2-3 record and a national title a year later.

It was a similar story for the Peoples Academy boys. The team made it to the state championship game in 2017. This fall’s seniors were freshmen on that team and knew the feeling of coming up just short.

Coach Faraci’s message about perseverance stuck with those players. They learned how to improve their performances from their goal-setting cards.

After all the practices and games and wins and losses over the past five seasons, having a female coach didn’t seem so weird for those players. The insensitive comments from referees and other coaches stopped, too.

Those players had a great coach. And that was all that mattered.

“After the game, I hugged one of my goalkeepers, Dylan Haskins, and he said, ‘Angie, you promised us we could do this,'" Faraci said.