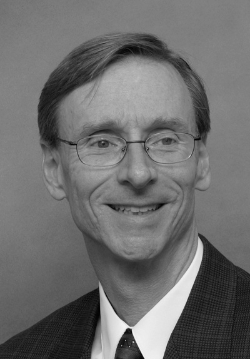 
R. Bruce Mattingly, who served as interim dean of SUNY Cortland’s School of Arts and Sciences since July 2008, was named dean of arts and sciences on Jan. 11, following a national search.

While he served in an interim capacity, the school received a number of grants, notably the National Science Foundation’s Robert Noyce Teacher Scholarship Program for future math and science teachers. Awarded last summer, the grant for nearly $900,000 will assist up to 50 students over five years. Arts and sciences faculty also recently obtained a $10,000 planning grant from the Sloan Foundation to explore the development of new Professional Science Master’s degrees.

Mattingly joined the College in 1999 as associate professor and chair of mathematics and was promoted to professor in 2002. He served as the department’s graduate coordinator in Spring 2003, Spring 2004 and the 2006-07 academic year. He taught undergraduate and graduate-level mathematics courses as well as introductory computer programming and online courses.

He participated in two national workshops sponsored by the National Science Foundation on the use of software in teaching linear algebra and wrote articles on mathematics teaching that were published in the Journal of Graduate Teaching Assistant Development and the New York State Mathematics Teachers’ Journal.

Mattingly chaired the Quantitative Skills Committee and served on the Teacher Education Council and on the Academic Affairs Council. A Faculty Senate member from 2000-04, he participated in other campus bodies focused on long range planning, faculty development and accreditation.

His research interests include Markov chains, matrix theory and scientific computing. His work has been published in The American Mathematical Monthly and the Operations Research Society of America Journal on Computing.

In recent years, he has presented his research at conferences sponsored by the Society for Industrial and Applied Mathematics, the Center for Discrete Mathematics and Theoretical Computer Science and the Seaway Section of the Mathematical Association of America.

He has served as a referee for the First International Workshop on the Numerical Solution of Markov Chains conference and peer-reviewed journals including Mathematical Programming, the American Mathematical Monthly and Linear Algebra and its Applications. He was an invited participant at a panel discussion on the assessment of mathematics programs at the Joint Mathematics Meetings in 2005.

A native of Louisville, Ky., he earned a Bachelor of Science in Applied Science and a Master of Engineering in Applied Mathematics from the University of Louisville. As an undergraduate, he was inducted into the Tau Beta Pi Engineering Honor Society and served on the Interscholastic Programming Team, which in 1980-81 earned sixth place in a national contest sponsored by the Association for Computing Machinery.

Mattingly received a doctorate in applied mathematics from North Carolina State University. While there, he was captain of the Interscholastic Programming Team, sponsored by the Association for Computing Machinery, which earned third place in an international contest. He received a Summer Research Award from the Department of Mathematics, a Graduate Student Certificate for Outstanding Teaching, a Maltbie Award for Outstanding Graduate Teaching Assistants in Mathematics and the Mathematics Department’s Winton Award.

In 1988, Mattingly joined the Mathematics Department faculty at Youngstown State University as an assistant professor and was promoted to associate professor in 1993. From 1995-99, Mattingly served as assistant to the dean in Youngstown’s College of Arts and Sciences.

While at Youngstown, he was honored with two research professorships. In 1990, he was awarded associate membership in the Sigma Xi Scientific Research Society. Youngstown’s Arts and Sciences Master Teacher Recognition Program acknowledged him as a master teacher from 1995-99.

Mattingly is a member of the Mathematical Association of America and the Pi Mu Epsilon Mathematics Honorary Society.

He lives in Virgil, N.Y., with his wife, Lynne, and their two sons, Peter and Nathan.