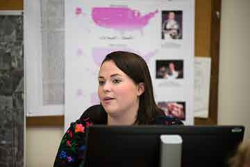 
In July 2013, Mary Colomaio ’15 had just graduated from high school with 24 college credits and was eager to begin her SUNY Cortland journey as a physical education major.

But she got hurt. Colomaio was diagnosed with a herniated disk in her lower back and realized that she would not be able to start in her physically demanding major for six months.

Colomaio didn’t want to put off college. She looked for an alternative career path so she could begin her college education immediately. Intrigued by the combination of technology, geography and cartography offered within SUNY Cortland’s Geography Department, she instead chose to major in geographic information systems (GIS).

She believes her academic career shift was one of those fortunate quirks in life.

“It is exactly what I want to be doing right now,” she said.

Colomaio, the utilities mapping program manager at Cornell University, is working to develop a new GIS database which, compared to most such systems in the country, will be more capable and accessible across campus departments. Although some GIS centers have this ability, Colomaio recently told a room of current SUNY Cortland students that her project will combine more systems than ever before to bring the software capability to a new level.

Colomaio, who is pursuing her master’s degree through the University of Southern California, returned to her alma mater Sept. 27 to share her unexpected career journey. She spoke to students in the Geographical Analysis course taught by Wendy Miller, an associate professor and chair of SUNY Cortland’s Geography Department.

The College’s GIS program, one of only two in the SUNY system, strives to give students real-world experience working with computer mapping software.

For one-and-a-half years at SUNY Cortland, she interned with Facilities Operations and Services through the summer and part time during the semesters. Working under Adam Levine, facilities and geographic information systems manager, she helped create the detailed maps needed for the College’s multi-million-dollar effort to dig up, replace and upgrade the main campus electrical system.

As a Geography Department service intern, she helped the villages of McGraw, N.Y., and Dryden, N.Y., track their residential water routes to simplify future maintenance work.

“This internship sparked my interest in moving forward into this field,” Colomaio said. “I gained personal and business development through working with contractors, being on site at 7 a.m. when they needed maps, and being out in the field collecting data. It is the drive and passion for your career that shifts you into gear and says ‘I have to go to work.’”

Colomaio earned her bachelor’s degree in Geographic Information Systems in two-and-a-half years because she was able to transfer 24 credits from college-level classes she took in high school. She also completed a SUNY Cortland minor in computer applications.

Time management and the eagerness to continue learning is very important in GIS, she said.

“You have to have the willingness and the drive to be constantly educating yourself about the field,” Colomaio said.

As much as she loves her job, she said she still faces the challenge of being a young woman in a male-dominated field.

“I have to solidify my presence, say this is who I am and I am not going anywhere,” she said.

Colomaio had advice for students interested in the discipline.

“It will take time to learn. You have to have the passion for it and keep pushing yourself beyond,” Colomaio said. “Do an internship. It is the only way to know if this is the field for you.

“Don’t give up,” she told women in the major. “There is a support system out there and look for the influential women in this field.”

Colomaio wants SUNY Cortland to be known as the teaching and GIS school.

“GIS applies to every field of work and has a bigger role in our life than we know,” Colomaio said.

In the above left image, Mary Colomaio speaks with students in a Geographical Analysis course taught in Old Main.