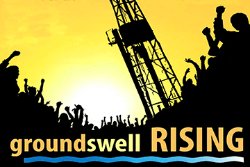 
A 2014 documentary film focused on the conflicting opinions over the natural gas extraction method called hydraulic fracturing — or “fracking” — in communities across America will be shown on Wednesday, Oct. 28, at SUNY Cortland.

Presented by the College’s Center for Ethics, Peace and Social Justice (CEPS), the screening of “Groundswell Rising: Protecting Our Children’s Air and Water,” begins at 7 p.m. in Sperry Center Johnson Lecture Hall, Room 106.

After the 52-minute film, a panel including the film’s associate producer, David Walzcak, will discuss the ethical and political side of this environmental dilemma and answer questions about the film. Kathryn Russell, SUNY Cortland professor emerita of philosophy, will moderate the panel.

The program is free and open to the public.

High volume horizontal fracturing is the process of drilling and injecting fluid into geological formations at extreme pressure to open and expand natural fractures within shale or other rock formations, releasing the methane gas inside.

“‘Groundswell Rising’ documents a social movement that sprung forth from the heated debate over fracking and communities being sacrificed for the extraction of yet another fossil fuel,” Walzcak said. “It's about people taking charge of their communities and not allowing a dangerous industry to move in and harm their way of life and finding new, healthy energy solutions.”

“Groundswell Rising” includes interviews from more than 40 people, many from the Finger Lakes region of New York state. The documentary’s focus is real people sharing their actual experiences rather than the more typical expert talking heads.

The film was directed and produced by Renard Cohen and Matt Cohen of the Emmy Award-winning Resolution Pictures, based near Allentown, Pa. Mark Lichty is executive producer.

“This is a film that embraces a ‘yes we can attitude’ and reinforces the fact that in this growing movement, activists outnumber Colorado’s oil and gas well count by four to one,” Walzcak said.

“The Groundswell Rising documentary is ultimately a rousing, convincing rallying cry that the little guys, working in numbers, can triumph,” wrote an LA Weekly reviewer.