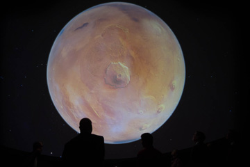 
SUNY Cortland Associate Professor of Physics Melissa Morris has a research interest in astronomy that dates back billions of years, to a time long before dinosaurs, plants or any other forms of life even existed.

She focuses on chondrules, the tiny round grains found in primitive meteorites that were formed roughly 4.5 billion years ago. Chondrules are vital to the study of the Solar System’s origins. They’re also the reason NASA has awarded Morris approximately $650,000 in the form of two grants.

She’ll use those funds on two separate interdisciplinary projects that both involve undergraduate research with SUNY Cortland students as well as colleagues from the University of Oxford, Arizona State University and the California Institute of Technology (Caltech). One project investigates the formation of chondrules in impacts between protoplanets; the other investigates the formation of layered rims around chondrules. Both funded projects will help understand the building blocks of planets like Earth.

Morris also has been invited to speak this fall at NASA headquarters in Washington, D.C., the University of Rochester and Rochester Institute of Technology, the Astronomical Society of New York and the Museum of Natural History in New York City later this year.

“It’s funny to deal with something so small when you’re an astronomer,” said Morris, who joined the College’s faculty in 2014. “But chondrules are very important to study because they tell you about things that happened when the Solar System was forming and how the planets were made …”

“If we study the primitive material in our Solar System, it gives us insight into all of these processes.”

With one of her student projects, Morris and her undergraduate research assistants will look for signs of hydrous minerals, or clays, in extrasolar planetary systems, which would point to the existence of liquid water and would indicate a similarity to our Solar System.

“We think we got almost all of our water from meteorites and asteroids. Not from comets — which are icy — but from rocks,” said Morris, who specializes as a theoretical astrophysicist.

Her job involves testing scientific theories until they “break,” as she puts it, and those theories often can include her own. Although astrophysics work is rooted in mathematical concepts, Morris is quick to reassure students in her classes that they do not need to consider themselves polished mathematicians or scientists to succeed in physics or astronomy.

“So many students say, ‘I’m not a math person,’ or ‘I’m not a science person,’” said Morris, who worked as a certified public accountant before earning a Ph.D. in astrophysics from Arizona State. “It’s kind of my mission to convince people that there’s no such thing.”

Mathematics major Tony Terzolo, of Camillus, N.Y., serves as her research assistant for the project that seeks to find water in extrasolar planetary systems. He took her introductory astronomy course, then later sat in on some advanced astrophysics classes.

“She’s been so great in helping me build background knowledge,” said Terzolo, who has minors in physics and computer science and hopes to pursue an engineering-related program in graduate school. “It’s incredible to see the respect she has in the field.”

Morris brought him along this past summer to the Gordon Research Conference on the origins of solar systems, at Mount Holyoke College in South Hadley, Mass.

“I call it the ‘Fight Club’ of conferences because you actually have to sign an agreement that you will not discuss anything that’s presented there,” Morris said. “That gives people the opportunity to present really new, groundbreaking work that hasn’t been published yet.

“And it’s just a really cool conference for a student to attend.”

The other SUNY Cortland students who will work this year on the latest NASA grant represent a cross section of majors: not only mathematics and physics, but also geology, history and psychology. This second project incorporates geology and cosmochemistry, as well as theoretical astrophysics. Morris also will bring one of her SUNY Cortland research assistants to Caltech to work with meteoritic samples, where they’ll use some of the most sophisticated instruments in the world.

“I love working with students who aren’t necessarily physics majors and showing them that they can do this work,” Morris said. “Regardless of what choices you make for a career, if you want to do any type of post-graduate work, research experience as an undergraduate is invaluable.”