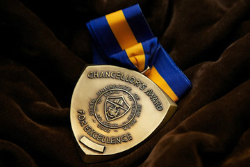 In all, 210 students were selected from among the more than 420,000 students enrolled in the system. The four from SUNY Cortland range from a children's book author to the president of a student athlete association representing all 10 schools in the SUNY Athletic Conference (SUNYAC).

The award is presented to students within the SUNY system who have been recognized for their academic success and have excelled in other aspects of their college lives as well. This includes any leadership roles, campus involvement, athletics, career-related pursuits, community service, or achievement in the arts, among other accomplishments.

“Today’s award recipients emerged from their campuses this year as the top scholars, athletes, performers, and achievers, as well as a tremendous source of inspiration,” said SUNY Chancellor Kristina M. Johnson. “The students being recognized today made the choice to be leaders on their campuses, prioritize their studies, and serve their communities."

Along with this year’s honorees, 92 SUNY Cortland students have earned the Chancellor’s Award for Student Excellence since the program began in 1997.

Here is a closer look at each of the honorees:

Fischer always knew that she wanted to make a difference in the lives of students, so much so that she wrote her own book about it.

She grew up as the oldest of three and always felt a protective and maternal instinct over her siblings, particularly her younger brother Scott.

“I’ve always wanted to be a teacher,” Fischer said. “But that special and inclusive education component came from my brother and my experiences with him.”

Scott Fischer has Attention Deficit Hyperactivity Disorder (ADHD) and Oppositional Defiant Disorder (ODD). It always fascinated her how his teachers wanted him to succeed and still acknowledged his challenges. This inspired her to pursue her major of inclusive childhood education with a minor in English language arts.

As a requirement of the Honors Program, students write a thesis during their senior year. Fischer decided to do something a little different and write a children’s book that incorporated both her major and minor. The book is titled Alex Volcano.

“Children with special needs aren’t presented nearly enough in the media, and this book will bring the change that people need,” Fischer said.

“I decided to write this book because of my brother, because of the students that I strive to work with, to create something that will make sense to them and something that they can see, use and feel connected to.”

After graduating, Fischer wants to pursue a master’s degree in educational psychology with hopes of becoming a special education teacher and later an administrator who can inspire change on a larger scale. She also is contemplating a doctorate in the field that would allow her to share her experience with a college audience.

“I want to be the teacher that a student can remember and cherish,” she said. “It is my goal to ensure students feel as though they belong in my classroom.”

Fischer, while maintaining a 4.04 GPA, served as vice president of the Colleges Against Cancer club. The club comes together multiple times a year to put on events such as Survivor Brunch and Relay for Life, to celebrate cancer survivors while also remembering and commemorating those who lost their lives to this disease.

“At Cortland, I found people who share the same values as me and who want to make a difference in the world. Finding that comfort and those people who shared that passion really fostered excellence in me,” Fischer said.

As a transfer student from Temple University, Lindsay found a place in SUNY Cortland where her compassion for people and dedication to sports would not go unnoticed.

“I realized how much an RA (resident assistant) could have an impact in the lives of other students,” she said. “Especially when they have those dark days because college isn’t an easy thing.”

Wanting to be a role model in people’s lives, she decided to become a resident assistant on campus for the past three years, with some influence from her family and friends.

“Initially I wanted to be a professional basketball player,” Lindsay said. “Then I stopped growing so I had to find another way to be involved in sports.”

Lindsay aims to attend Manhattanville College to pursue a master’s in sport business and entertainment management. After graduate school, she plans to stay at a collegiate level of sport management in event operation.

“It feels like I offer more when I do my work and actually see the outcome of it,” she said.

Lindsay’s sports involvement goes much farther with her internship at the State University of New York Athletic Conference (SUNYAC) office in Park Center and as a sports official and office assistant for intramural and club sports in the Recreational Sports office. She has volunteered as a liaison between the New York City Marathon and SUNY Cortland’s Sport Management program.

As a referee, Lindsay had to deal with athletes’ rising tempers in the heat of games. This way, she continued to learn new ways of how to interact with different people and make everyone comfortable in the end.

Lindsay made the Dean’s and President’s lists and was honored among the Top 5 percent of her class at Honors Convocation, all while balancing her many activities and resident assistant duties.

“Cortland gave me that extra something to know that there is a possibility that my efforts and what I do here can be seen and that it’s going to matter at the end of the day,” Lindsay said.

Norris always knew he wanted to help people. He never realized how much of an impact he would make during his college career.

A member of SUNY Cortland’s wrestling team, Norris served as president of SUNYAC’s Student-Athlete Advisory Committee (SAAC). As president, Norris represented student athletes from all 10 SUNYAC campuses and conveyed their needs and concerns to SUNYAC administrators. He tasked each of the 10 SUNYAC member schools to develop ideas for different events. At SUNY Cortland, Norris created Mental Health Mondays, where athletes could have a safe place to relax and talk. The first Monday, they were introduced to the Counseling Center, where they could find someone to talk to about mental health issues.

Norris attended the NCAA Division III national conference in Orlando, Fla., in February and had the opportunity to speak about the programs the SUNYAC SAAC sparked, including Mental Health Mondays.

“That was my favorite moment this year, because the presidents of Division III schools were looking to me for advice” he said. “I spoke up on mental health and some other changes.”

Norris played high school sports including football, baseball, track and wrestling. At SUNY Cortland, head wrestling coach Brad Bruhn chose Norris after his freshman season for a role as Cortland’s wrestling SAAC representative. He then was nominated to be the College’s overall representative for SUNYAC SAAC, where he served as vice president and later president.

Norris maintained a GPA in the top 10 percent of his class and is a member of the interdisciplinary academic honor society Phi Kappa Phi, the Chi Alpha Sigma National College Athlete Honor Society and the National Society of Leadership and Success Honor Society.

Norris’ career goal is to become a physical therapist. He will attend graduate school at SUNY Upstate Medical University in Syracuse, N.Y.

“I’m really big on wanting to help people and just seeing the effect they (physical therapists) have on people is awesome,” Norris said.

When it comes to her wide variety of interests — speech and hearing science, the Spanish language, music, and the Student Activities Board — Sullivan has never had a problem with prioritizing and organizing her passions.

“I have a million calendars and everything is color-coded and there’s a folder for everything, so I’m just staying on top of everything because it’s a lot,” she said.

Sullivan began her career at the College planning to be a teacher for three semesters. She switched to speech and hearing science, where she found her love for speech-language pathology. Sullivan will attend George Washington University in Washington, D.C., in the fall to continue her studies and work as a graduate assistant where teaching undergraduate classes and work in the speech and hearing clinic. She then hopes to work as a speech-language pathologist in nursing homes or hospitals to assist people who have had strokes, aphasia and other types of communication disorders.

“Being bilingual is a huge advantage in speech-language pathology,” Sullivan said.

Her fluency in Spanish began at a young age and has helped further her career path. Sullivan was in a dual language program through elementary school, where every other day of the week was taught in complete Spanish.

She continued taking Spanish classes through high school and declared it a minor in college, while maintaining a 4.02 GPA. Sullivan put her skills to the test when she studied abroad in Málaga and Madrid, Spain for six weeks.

In her free time, Sullivan also loves to play the piano, as music has always been a major part of her life. Not only does she belong to a family of musicians, but she also played electric bass in high school.

Sullivan also serves as the president of the College’s Student Activities Board (S.A.B.). She works behind the scenes to coordinate events such as Spring Fling and brings speakers to campus, including the Oscar-winning costume designer of “Black Panther,” Ruth Carter, who spoke at SUNY Cortland in February.

“S.A.B. has really been the defining part of my SUNY Cortland experience,” she said. “It’s very close-knit and we are like a family.”