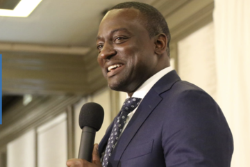 
The Netflix series “When They See Us” captivated viewers this summer as it dramatically told the tale of the Central Park 5.

In 1989, five Black and Latino teenagers were falsely accused and later convicted of the brutal assault and rape of a woman who was jogging in New York City’s Central Park. The convictions were vacated in 2002 after DNA evidence confirmed a different perpetrator.

One of those exonerated men, Yusef Salaam, will place his experience in a broader perspective during an appearance at SUNY Cortland on Thursday, Nov. 14. His lecture, “The Art of Criminalization,” is scheduled from 7:30 to 8:30 p.m. in Old Main Brown Auditorium. It is free and open to the public.

One of the viewers deeply affected by the Netflix series was SUNY Cortland senior Alice Luo, an English major and Africana Studies minor from Staten Island, N.Y. She started watching the show during summer break, but waited to complete “When They See Us” until late August when she could watch with her Cortland classmates.

Luo, the president of Know Your Roots, a student club that aims to deepen and enrich the study of the Black experience and Africana studies on campus, used the series as a lens for discussion at the club’s first meeting of the semester.

“The fact that this history is still relevant 30 years later is phenomenal,” Luo said. “That’s the whole mission statement of Know Your Roots, connecting our past to our present to see a better future.”

In looking for ways to continue the conversation, they sought out Salaam, who has traveled across the U.S. and the Caribbean delivering insightful lectures and facilitating conversations about difficult topics. He raises important questions about race and class, failings of the criminal justice system, legal protections for vulnerable juveniles and fundamental human rights.

Salaam was 15 at the time of the accusation. He served six years and eight months in juvenile detention from 1990 to 1996.

Now living in Georgia, he is a board member of the Innocence Project, a non-profit organization committed to exonerating those who are wrongly convicted of crimes. Salaam was an advocate for a New York state law passed in 2017 that requires law enforcement agencies to videotape interrogations of those accused of serious non-drug felonies. He received a Lifetime Achievement Award from President Barack Obama in 2016.

“The saga of the Central Park 5 is a grave reminder of the American criminal justice system that is broken, but still profits from Black prison labor and incarceration,” noted Seth N. Asumah, chair of the Africana Studies Department and founding faculty advisor to Know Your Roots. “SUNY Cortland and the surrounding areas will be beneficiaries of lessons that one can only learned from the original source, and that source is Yusef Salaam.”

According to Asumah, Salaam’s talk will critique the existing system, highlighting how race, gender and class continue to shape our country, the criminal justice system and public perceptions.

Luo encourages all Cortland students to attend Salaam’s lecture to learn about his personal story as well as topics such as race and criminal justice that remain relevant today.

“My hope is that people are openminded,” she said. “The reason we titled the event “The Art of Criminalization” is because it’s literally an art. We don’t understand how these negative images of Black and brown people are being instilled into our mindset.”