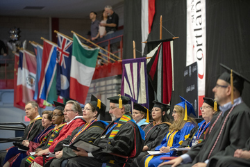 
Two distinguished friends of SUNY Cortland were scheduled to receive honorary doctoral degrees from the State University of New York during Commencement 2020.

Instead, they will join graduates at the Commencement ceremony in May 2021.

Susan MacLaury ’68, Ph.D., LSW is an Emmy- and Oscar-winning documentary producer with decades of experience in social work and higher education.

John Sipher enjoyed a 28-year-career with the Central Intelligence Agency’s National Clandestine Service that made him an internationally respected authority on national security and espionage.

A national leader in the fields of health, education and social action, MacLaury graduated from SUNY Cortland with a bachelor’s degree in political science in 1968. She went on to earn several advanced degrees, including a master’s in human sexuality from New York University in 1973, a Ph.D. in school health from New York University in 1982 and a master’s in social work administration from Hunter College in 1986.

Directing programs for teenage girls at Educational Alliance, Grand Street Settlement and the New Jersey chapter for the Prevention of Child Abuse from 1978 to 1993, MacLaury made a positive impact in the lives of many. She also trained middle and high school teachers in New York and New Jersey to run advisory groups for those in need.

Her book, Student Advisories in Grades 5-12: A Facilitator’s Guide, is in its second printing and has helped countless teachers to better understand their students and create meaningful group experiences.

From 1994 to 2014, MacLaury served as an associate professor of health education at Kean University.

In 2005, she learned about suffering children in war-torn northern Uganda and teamed up with her husband, Albie Hecht, a producer of television shows and films including “SpongeBob SquarePants” and “Dora the Explorer,” to create a documentary. The resulting film, 2007’s “War/Dance,” was nominated for a best documentary feature Oscar and won Emmys for best documentary and outstanding cinematography.

As co-founder and executive director of the non-profit media company Shine Global, MacLaury produced a number of other films about vitally important topics, including 2012’s “Inocente,” a documentary about a homeless and undocumented teenage artist who followed her dreams. The film won the 2013 Academy Award for best documentary — short subject.

Shine Global is committed to outreach and engagement beyond the screening of its films. The organization has partnered with the African Medical and Research Foundation to aid people in Uganda and with The Harvest of Hope Foundation to support migrant farm workers in Florida and around the country. MacLaury has worked to create U.S. standards-based curricula for your films to help teachers who use them as teaching tools in the classroom.

At the time of his retirement, Sipher was a member of the CIA’s Senior Intelligence Service, the leadership team that guides CIA activities globally. His influential articles have appeared in publications including Foreign Affairs, The Atlantic, Politico and The New York Times and he has been an expert guest on broadcast giants such as CNN, MSNBC, National Public Radio and PBS NewsHour.

Sipher understands firsthand the value of a SUNY Cortland education. His father, the late Roger E. Sipher, was a SUNY Distinguished Teaching Professor of history, who taught here for 43 years and helped train generations of social studies teachers.

Sipher attended Hobart and William Smith Colleges, graduating with a bachelor of arts in history in 1983 — serving as captain of the national champion lacrosse team — and then to Columbia University, where he earned a master’s degree in international relations in 1986.

He then began a long and distinguished career in the CIA, serving multiple overseas tours as station chief and deputy station chief in Europe and Asia, including a post in Moscow where he ran the agency’s Russian operation. Sipher’s tours also took you to many high-threat, unstable environments in the Balkans and South Asia, among other locations.

In various roles, Sipher helped our nation to work with foreign and domestic partners in solving national security challenges. He was directly responsible for leading large, globally dispersed teams and collaborated with senior U.S. intelligence, military and law enforcement leaders to guide complex human and technical operations in ambiguous, dangerous and unstructured situations in foreign nations.

As the recipient of the CIA’s Distinguished Career Intelligence Medal, Sipher was recognized for a cumulative record of service reflecting a pattern of increasing levels of responsibility and strategic impact and distinctly exceptional achievements that reflected the agency’s mission.

Since retiring from the CIA, Sipher has worked as a management consultant for the McChrystal Group, a firm that helps organizations adapt to change and uncertainty, and he currently serves as the director of client services at CrossLead, a software provider that manages leadership and cultural change. As the co-founder of Spycraft Entertainment, he connects retired senior intelligence officials with producers, writers and studio executives in Hollywood, making the movies and shows we consume that much closer to reality.