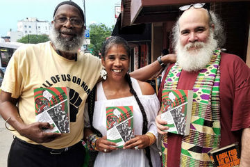 
SUNY Cortland’s Black Student Union is inviting activists and scholars, including a former member of the Black Panther Party, to speak on their lifelong efforts for civil rights.

The event, “Revolutionizing the Struggle of Liberation: New York Members of the Black Panther Party,” begins at 6 p.m. on Monday, Feb. 17 in Old Main Brown Auditorium.

Speakers include Sekou Odinga, a founding member of the Harlem Chapter of the Black Panther Party, déqui kioni-sadiki, a human rights activist, and Matt Meyer, a University of Massachusetts-Amherst scholar.

“I think part of the effort will be to educate students by letting them learn from the source of what the history actually is, a history of an organization that was set up to fight for liberation, not only for Black people but also for everybody,” said Nikolay Karkov, associate professor in the Philosophy Department.

Odinga has worked to build awareness and advocate for the release of political prisoners and prisoners of war. He was imprisoned for 33 years for his actions with the Black Liberation Army, an underground arm of the Black Panthers, in the 1960s and 1970s.

kioni-sadiki is a Black feminist, artist, poet and chair of the Malcolm X Commemoration Committee. She is a human rights activist who focuses on issues of political and mass imprisonment. kioni-sadiki is a producer of “Where We Live,” a weekly radio program on WBAI-FM that focuses on public affairs, repression and racism, among other topics.

Meyer is a senior research scholar at the University of Massachusetts-Amherst Resistance Studies Initiative who strives to bridge the gap between academics and activists. He has also represented the International Peace Research Association at the United Nations Economic and Social Council.

“Our speakers are also going to address some of the communal practices the Panthers were developing during their existence,” Karkov said. “They had something called “survival programs,” which were programs in the community to organize life on the basis of social justice, egalitarianism and mutual aid. They organized free breakfast for kids in the poor Black communities. They had free schools and free health clinics where they brought in doctors to take care of people who had no relationship with the health care system.”

Together, the three have co-authored a book with other writers, Look for Me in the Whirlwind: From the Panther 21 to 21st Century Revolutions. It discusses the legacy of 21 members of the Black Panther Party who were indicted on multiple charges of violent acts and conspiracies in 1969.

The event is sponsored by the Cultural and Intellectual Climate Committee and the Africana Studies, Philosophy and Economics departments.