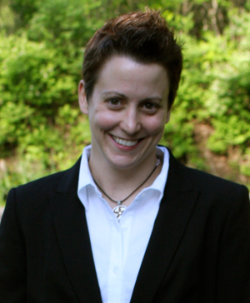 
U.S. Olympians in London who are worried about paying their bills are depending on SUNY Cortland graduate student Angel Bovee, a retired women’s boxing champion who once lived out of her car to make ends meet.

The 39-year-old recreation major works with the Team USA Career Program as a specialist for Adecco, a global human resources company that supplies temporary workers to business clients. Adecco partners with the U.S. Olympic Committee for a simple reason: to provide the country’s Olympic and Paralympic competitors — both current and retired — with career services and job prospects.

Bovee’s full-time work has taken her from a Colorado Springs office to the London Olympics, where she’s keeping a video blog of the career program’s success stories until the Games conclude Aug. 12. She seems to be the perfect ambassador for Adecco’s “Better Work, Better Life” campaign, simply because she understands first hand the need for it.

“Athletes are competing longer and longer because of the advances in sports medicine,” said Bovee, speaking from London. “So a lot of times, when they retire from a sport, they’re at least eight years behind their peers as far as career experience goes.

The athletes that Bovee helps aren’t the ones on Wheaties boxes. They come from teams that compete at the Winter and Summer Games in nearly every non-marquee sport — from archery to women’s ice hockey. She works with people who make their earnings outside of sports, both team captains and competitors who might never stand on the medal winner’s podium. Even an Olympian who competed at the 1972 Summer Games in Munich has used Adecco’s services.

“I can’t rattle off a specific number (of athletes served), but I always say that for every Michael Phelps, there’s probably 100 athletes training that you’re never going to hear about,” Bovee said. “Everybody thinks if you’re an Olympian that you’re on a cereal box, and it’s just not the case.”

Bovee knows that well; the goal during her boxing career was never an endorsement deal, just a ticket to the first-ever Olympics for her sport.

“(Boxing) was the hardest thing I had done in my life and I loved the challenge,” said Bovee, who started boxing in 1998 and won a national title without a coach at the 2000 U.S. National Golden Gloves Championship. “One day, I walked into this dirty, dingy boxing gym and I never wanted to leave.”

She paid her own way to fly herself to fights and managed to find stand-in trainers for her corner of the ring. She won many bouts early on, but rules prevent amateur Olympic-style women’s boxers from collecting money winnings. That made it all the more risky when Bovee decided in 2002 to quit a cozy job producing television commercials and take out a $15,000 loan for living expenses so she could chase her Olympic dream.

Women’s boxing, however, had yet to be added to the Olympic program.

For six months in 2002, she lived out of her Plymouth Sundance at a Poughkeepsie train station while she commuted nearly every day to Brooklyn, a prime training destination for boxers. Purchasing train tickets, paying for gym time and attempting to eat a healthy diet on-the-go added up, but she eventually found work as a personal trainer and an apartment to share.

“That’s why I’m so passionate about this program,” Bovee said of her work with Adecco. “If I had a Team USA Career Program that I could have accessed back then — I had the skills and the experience — but it’s really hard to find a job where you can disappear for three weeks and go to a training camp in Russia or wherever you have to go for competition.”

As it pertains to her success in the ring, the gamble paid off. Bovee’s boxing résumé stretches a mile long, highlighted by three national titles and trips to the first two world championships for women’s boxing. She’s boxed in arenas from Istanbul to Madison Square Garden and even served as a national team captain for the second world competition.

But it wasn’t all golden. Rules prevent female boxers from competing internationally after they turn 35 years old, so Bovee’s Olympic dream evaporated after the International Olympic Committee rejected the inclusion of women’s boxing in the 2004 and 2008 Summer Games. Until this year, when women’s boxing made its Olympic debut in London, boxing had been the only Olympic sport without a women’s program.

The Norwich, N.Y., native received a scholarship to pursue a master’s degree in recreation at SUNY Cortland. She settled in Central New York in 2009, her competitive boxing career behind her, and kept herself busy as a graduate assistant with the College’s Recreation Department and as an AmeriCorps volunteer at the Lime Hollow Center for Environment and Culture.

“I just tried to keep myself super busy,” Bovee said. “In making that transition from being an elite athlete to being back in the world again, I think Cortland did me a lot of good.”

She submitted her master’s thesis, on the challenges faced by American female boxers, and is currently waiting for its final approval. She also serves on the USA Boxing Board of Directors, a seat she’s held since 2006.

In that role, she won one of the most important fights of her life by earning a spot for women’s boxing at the London 2012 Olympics.

“For me, it’s bittersweet,” said Bovee, who will celebrate her 40th birthday in London on Aug. 7. “I’m really proud for the sport and I’m a little sad I couldn’t compete. But as we all do, I had to redefine my dream and change it.

“In a way, it’s almost fitting that I’m here today in this capacity.”

Angel Bovee, finally, made it to the Olympics.