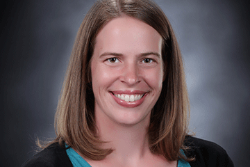 
Following a search, SUNY Cortland has appointed Laura Davies, an associate professor of English who directs the university’s Writing Programs, as the new chief of staff in the President’s Office, effective Jan. 1.

An integral member of the President’s Office and the executive leadership team (President’s Cabinet) for the university, the chief of staff reports directly to the president and serves as a key advisor on planning, decision-making and problem resolution.

The chief of staff is one of five members of President Erik J. Bitterbaum’s cabinet and advances the president’s leadership agenda through coordinated planning with the senior management team, collaborative working relationships at all levels of the campus and oversight of various assignments and special projects.

“Laura brings a variety of rich experiences to the chief of staff position, with her work as a faculty member and administrator centered on issues of access and inclusivity,” said SUNY Cortland President Erik J. Bitterbaum.

“Throughout her career she has demonstrated a strong commitment to supporting students, empowering faculty, and fostering collaborative problem-solving,” Bitterbaum said.

As chief of staff, Davies' goal is to help the university more fully realize its mission as an institute of public higher education.

“As a scholar, teacher and administrator, my work has centered on the heart of the university mission: its students," Davies said. "I am committed to continuing this work through collaborating with the university’s faculty, staff, administration and students to build programs and initiatives that will ensure access for all, especially for those who have historically been marginalized in higher education.”

Davies replaces Virginia Levine, the university’s longtime chief of staff and vice president for policy and accreditation, who died on March 29.

Patricia Francis, a former SUNY Cortland Psychology Department faculty member who also served from 1997 to 2004 as Cortland’s executive assistant to the president, returned to her former institution in early April to fulfill the chief of staff role on an interim basis.

Davies has directed the university’s Writing Programs since she joined the institution in 2014 as an assistant professor. She was promoted to associate professor in 2017.

She received her B.A. in history and English with integral honors from Le Moyne College in 2004; her M.S.T. in English from the University of New Hampshire in 2005; and her Ph.D. in composition and cultural rhetoric from Syracuse University in 2012.

“I greatly look forward to the perspectives that Laura will bring to her new position and to the President’s Cabinet,” Bitterbaum said.