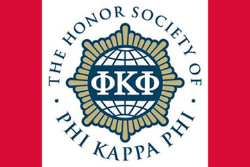 
The SUNY Cortland chapter of a national honor society for all academic disciplines has named its “Scholars of the Year,” and they represent a diverse range of majors, from archaeology to community health to adolescence education: mathematics.

Six outstanding members of the College’s chapter of Phi Kappa Phi were recognized April 21 for the high standards they set for future scholars through excellence in discipline, dedication and time management. The accolades were based on academic accomplishments as well as leadership and volunteer involvement at the College and in the community.

Founded in 1897, Phi Kappa Phi annually initiates about 30,000 new members from nearly 300 campuses in the U.S., Puerto Rico and the Philippines.

Here’s a closer look at this year’s Phi Kappa Phi scholars, all seniors:

In Their Own Words: “My majors have taught me so much about the world, how to relate to it, and how to deal with it. It has taught me the diversity there is around me and about the problems facing all of us, as well as many of the magnificent things human beings are capable of.”

After Gorall studied abroad in India and Turkey, she was grateful for the life experiences and knowledge she had gained. She knew she had to seek a career helping people all around the world.

Gorall currently is pursuing funding to carry out anthropological research in India.

She has served as an Educational Opportunity Program tutor for anthropology as well as completing teaching assistantships for anthropology classes. She completed five semesters of Arabic and continues to study the language on her own time.

A Green Representative for Residence Life and Housing who headed the Green Rep publishing committee, Gorall also served as vice president of Colleges Against Cancer and president of the International Awareness Club.

Her leadership responsibilities earned Gorall many SUNY Cortland scholarships and accolades, including induction into the Phi Kappa Phi interdisciplinary honor society, an undergraduate research grant, an Excellence in Understanding Multiculturalism and Gender Issues Award, a Civil Engagement Leadership Award, the Judson H. Taylor Community Service Scholarship and the Anthropology Award for Outstanding Academic Achievement. She has made the President’s and Dean’s lists.

“All the things I am involved in truly allow me to gain unique insights to different experiences all in their own way,” Gorall said. “These experiences have helped me grow, both personally and academically. There is no doubt that my activities at SUNY Cortland and study abroad will give me an advantage in the future, throughout my life.”

In Their Own Words: “I’ve had many great influences throughout my life who have pushed me to strive to be my best, so receiving this honor is the greatest way I can thank them for believing in me.”

Kravitz found the time to maintain a 3.95 GPA and also volunteer around the Cortland community and organize several educational and sustainability conferences on campus. The vice president of the education honor society, Kappa Delta Pi, she also was a member of the Education Club and the Special Education Club.

“At a very young age, I set my first goal to become a teacher and to this day, that has not changed,” Kravitz said. “Throughout my life I have had many positive influences both inside and outside of the classroom. I always knew I wanted to be someone who makes a difference and tries to make an impact on children’s lives the way other educators have impacted and influenced my life.”

At Cortland, she taught English to children in Costa Rica and volunteered as a Core 101 teaching assistant.

Currently, Kravitz student teaches, in addition to babysitting for a family of four children. She also loves to cook and considers herself a “foodie.”

Kravitz has made the President’s List five times and the Dean’s List on seven occasions. She was invited to Honors Convocation in all four of her years at SUNY Cortland and she received the Philips Scholarship seven times.

“To be recognized for the effort I put into my academics and extracurricular activities is extremely humbling, as I take pride in simply applying myself the best I can,” said Kravitz.

In Their Own Words: “I consider myself a lifelong learner and yearn to learn different talents and new interests.”

As a member of the Math Club at SUNY Cortland as well as a peer tutor and member of the Association of Women in Mathematics, Laper hopes to teach high school mathematics.

“My goal is to teach calculus as well as to start a Math Honors Society at my school for the students,” she said.

“I also want to use my experiences teaching abroad to create a global community within my school and to help plan trips for students to travel abroad.”

Laper received the Noyce Scholarship, the Esther K. Hawthorne Scholarship, the Future New Yorker Award and a teaching grant. She maintained an overall 4.02 grade point average and was ranked in the top 5 percent of her class.

Laper was a member of the club rock climbing and gymnastics teams.

“I am going to miss the opportunities I had at Cortland that allowed me to try new things, but I hope to take my curiosity with me throughout my life in order to continue to grow and learn,” she said.

In Their Own Words: “I am honored to receive this award, especially from the honor society of Phi Kappa Phi, because this society is the oldest and most selective honors program I am involved in.”

She plans to pursue a master’s degree in public health at the University of Rochester.

“My goal is to become a field or applied epidemiologist, with a focus on communicable diseases,” she said.

Marcello currently interns full-time at the Tompkins County Health Department in Ithaca, N.Y., where she volunteers her time to help two communicable disease nurses who focus on infectious disease control.

She has loaned her talents to several different events on campus including the Walk for Houston, the Take Back the Night march and the CROP Walk for hunger.

Marcello studied abroad in Rome, Italy, and completed a three-week internship in Belize this past winter.

She was presented with scholarships, including the Ross L. Allen award, the Overseas Academic Program Scholarship, the McDermott Professional Studies Scholarship and the Gerald P. Theisen ’53 and Ethel Mahan Theisen ’55 Scholarship. Marcello made the President’s List five times and the Dean’s List once.

“I am appreciative that PKP offers opportunities like this and gives SUNY Cortland students the opportunity to come together and celebrate their successes, Marcello said. “Receiving this award is a nice reminder that hard work really does pay off.”

In Their Own Words: “I believe if you give back to others you will be rewarded many times over and not with monetary means. With this mentality, I will strive to continue to excel in all facets life.”

At a young age, Norris felt that he should help people and always give back to the community, because his mother was, and still is, employed by Cortland County Community Action Program Head Start.

For example, since 2001, he has participated in the CAPCO Head Start holiday gift giveaway program.

“My mom was diagnosed with cancer in November 2014,” Norris said. “This affected our family in a profound way. I myself found that I wanted to excel even more as I wanted to make my mom very proud of me both academically as well as athletically.”

In high school, Norris became a member of National Honor Society and was awarded Athlete of the Year.

While a member of the SUNY Cortland varsity wrestling team, Norris made the Dean’s List his freshman and sophomore years and the President’s List three semesters in a row.

At Cortland, he joined the Fit Club and was a member of Relay for Life and an avid volunteer in the Cortland community. Norris serves as vice president of SUNY Cortland’s Student Athlete Advisory Committee (SAAC) and the vice president of communications on Student Leadership Cabinet for the State University of New York Athletic Conference’s (SUNYAC) SAAC.

Upon graduation, Norris aspires to become the SUNYAC Student Athlete Advisory Committee president. He ultimately hopes to be accepted into a doctoral program in physical therapy.

In Their Own Words: “I would not have been able to achieve such an honor if it was not for my professors, family, and friends always pushing me to strive and achieve.”

After the unexpected loss of her father, Westwater found that her third-grade teacher, Mrs. Rosenthal, was there for her through every step of the grieving process.

“After being exposed to her genuine kindness and compassion towards me, I knew my life goal was to help others,” she said.

Westwater was the treasurer of the club gymnastics team on campus, a member of the Math Club, and an ASAP peer tutor and supervisor. Last summer, she served as a research assistant at the Eisenhower School for National Security and Resource Strategy in Washington, D.C.

Before college, Westwater competitively danced for eight years and cheered for six.

“I loved being able to express myself through a performance, but I also love learning new things,” said Westwater.

Westwater will attend Stony Brook University in the fall to pursue a master’s degree in teaching mathematics. She ultimately has an eye on a doctorate in mathematics.

“I yearn for the day when I can walk into a high school calculus class and share my love of math with the next generation.”