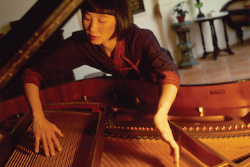 
Members of the SUNY Cortland community will have a rare opportunity April 28 as internationally renowned pianist Margaret Leng Tan returns to campus with a free preview of her upcoming performance at the National Gallery of Art in Washington D.C.

Tan, an avant-garde musical experimenter known as “the sorceress of the piano” due to her ability to produce unique and memorable sounds from the instrument, will perform at 8 p.m. Friday, April 28, in the Dowd Fine Arts Center Theater. The concert is free and open to the public.

The concert will be a homecoming of sorts for Tan, who was awarded an honorary doctorate of fine arts at SUNY Cortland in 2011 and considers this her “adopted” university.

“We are truly honored to again host such an acclaimed and world-renowned artist,” President Erik J. Bitterbaum said. “Her work all but defies description, and those attending her concert are in for a musical experience unlike any other.”

Tan will present “THE THREE Cs: COWELL, CAGE, CRUMB, Pioneers of the Avant-garde Piano.” Henry Cowell, John Cage and George Crumb laid the foundations for the extended language of the piano, conjuring new sound possibilities from the instrument’s interior.

The program includes pieces by all three composers, some of which will be played directly on the strings of a piano. Tan, like her collaborators, Cage and Crumb, is a sonic experimenter, playing music in unorthodox ways and incorporating toy pianos, hand-cranked music boxes, bicycle bells and similar items into her work.

Tan, a native of Singapore, was the first woman to earn a doctorate from the prestigious Juilliard School of music in New York City. Her artistic drive soon led her to stray from classical piano into the avant-garde world of experimental music.

By fusing American alternative piano with the Asian influences of her childhood, and by experimenting with unusual instruments, Tan created a truly unique sound.

Over the years, she made numerous audio and video recordings, earning international acclaim. Tan is the foremost interpreter of Cage, a groundbreaking composer and aesthetic philosopher whose ideas have strongly influenced modern avant-garde art.

Tan, who has been described as Cage’s muse, and Cage, who was her mentor, worked together for 11 years, until his death in 1992.

Her more recent collaboration with Crumb, an iconoclastic composer who has won both a Pulitizer Prize and a Grammy Award, has culminated in a brand-new work: “Metamorphoses, Book I.”

Tan’s presentation of this new composition will be the highlight of the Cortland concert. “Metamorphoses, Book I,” is Crumb’s first major piano cycle since his groundbreaking “Makrokosmos” series from the 1970s. Each of the 10 pieces in “Metamorphoses, Book I” is inspired by a different painting. They draw on the rich diversity of Crumb’s sound world, achieved through a host of string piano techniques.

Cage’s prepared piano piece, “The Perilous Night,” will open the program. It transforms the piano into a veritable percussion orchestra. Cage’s teacher, Henry Cowell, invented the tone cluster and the term “string piano” for playing directly on the piano strings. “Aeolian Harp” and “The Banshee” are highly evocative string piano pieces while “The Tides of Manaunaun” and “Advertisement” employ all manner of note clusters played by palms, forearms and fists.

Tan’s Cortland preview will next be performed as the world premiere of Crumb’s “Metamorphoses, Book I” on May 7 at the National Gallery of Art. A preview of the preview is available as a video trailer.

The quintessential performer, Tan excels at interpreting difficult music for wide and diverse audiences. She has made the often-arcane tradition of avant-garde music accessible to people around the world, including students at SUNY Cortland.

Tan was introduced to Cortland through her professional friendship with Donna Anderson, professor emerita of music at SUNY Cortland. Through their shared interest in the legacy of impressionist pianist Charles T. Griffes, Tan developed a strong connection with the College. She has performed at the college on several occasions.