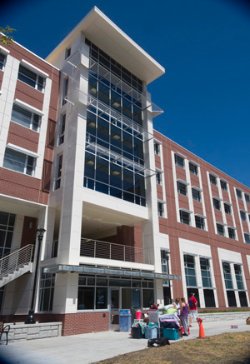 
Move over, Blaze. A newer, bigger dragon has landed on College Hill.

But when Dragon Hall opened its doors to incoming students this past Friday, it wasn't puffing out as much steam as its red brick neighbors along Neubig Road.

That’s because SUNY Cortland’s 18th residence hall aspires to be less of a “red” dragon than a “green” one, according to Rob Shutts, the facilities planning, design and construction project manager on the $22 million Dragon Hall project. The building will officially be unveiled to the SUNY Cortland community during a ribbon cutting scheduled for 3 p.m. on Sept. 25.

“From the outside you can’t tell the building is any different,” said Shutts. “But we are moving toward a new type of building envelope. ”

A thermal picture of other campus residence halls might show them losing heat in scattered spots like a storybook serpent hissing steam in a fairy tale. This is due to small gaps in the exterior insulation that tend to occur in traditional building construction.

These gaps happen where the exterior wall framing interrupts the wall insulation, resulting in a “thermal bridge” that carries heat between the interior and exterior of the wall. This more than 60-year-old approach to preserving warmth inside a building has been modified in Dragon Hall to meet both the increasing energy-conservation demands of modern building codes and the College’s institutional commitment to environmental sustainability.

Dragon Hall features foam insulation sprayed into every crevice within the building’s framing. This foam insulation, in conjunction with a minimum of two inches of continuous insulation over the entire exterior wall surface, results in a much more energy-efficient envelope.

“Here you have a building that is designed to push the insulation all to the exterior, between the brick outside and the metal studs that support it,” Shutts explained.

In fact, the building’s energy performance has been calculated as 43.6 percent better than the national baseline by which similar facilities are measured, according to Shutts.

Dragon Hall’s superb heat-conserving performance will be enhanced by a computer system programmed to manage energy use and engage all residents in conservation.

An information screen that will be installed in the lobby will let students know details about the energy consumed in their building. And within their suites, students will be able to monitor and control their own electricity use as they learn how to reduce their carbon footprints.

“But it still needs the cooperation of the students,” Shutts said. “This is a learning environment and an new era in building monitoring and design.”

The facility features insulated, double-pane windows that contain louver blinds inside them. Outside, the fiercest rays of sunlight are deflected off metal solar shades placed strategically above the most exposed windows, much like those on the School of Education Building.

“Those shades are designed to partially block the sun’s rays during the most intense days of the summer,” Shutts said. “Parts of the building that receive the morning and evening light when the sun is not as intense don’t have them.”

Atop Dragon Hall is a solar panel array intended to offset a portion of the building’s electric consumption. It is expected to provide 28,137 kilowatts of electricity annually, which is about 8 percent of the estimated electrical use for the entire building, Shutts said.

“This is roughly equivalent to 55 barrels of crude oil conserved per year or 46,821 car miles not driven,” Shutts said.

The solar array should eventually pay for itself. Meanwhile, the New York State Energy Research and Development Authority (NYSERDA) will grant the College an approximately $35,000 rebate as an incentive for installing this energy-saving feature.

Very bright and long-lasting, light-emitting diode (LED) fixtures are used instead of the compact fluorescent lamps installed in the older residence hall.

“These more closely approximate natural sunlight and they last a very long time before they need replacing,” Shutts said.

Additionally, Dragon Hall will be far more sensitive to the nighttime comings and goings of the students than Glass Tower Hall.

NYSERDA conducted a whole-building assessment of Dragon Hall’s energy efficiency and will cut a rebate check for about $103,000 in addition to the solar panel rebate, according to Shutts.

The U.S. Green Building Council sets the industry standard for energy efficiency, according to Shutts.

It offers Leadership in Energy and Environmental Design (LEED) certification to facilities it evaluates as having achieved certain nationwide benchmarks in environmental sustainability.

“You can be eligible to receive a certain number of points for your energy conservation performance, as well as use of renewable materials in building construction,” Shutts said.

In 2005 the Glass Tower Hall construction project captured LEED certification for the construction features that significantly reduced its carbon footprint, becoming the first residence hall built in SUNY to achieve that designation.

All subsequent SUNY Cortland new construction and major renovation projects have reflected a similar kindness toward the environment, as the result of what facility managers learned from Glass Tower Hall. In fact, all have met the USGBC’s higher, silver designation of green building design.

This fall, Dragon Hall project managers will go for an even higher level of LEED credit and raise the bar on future facility energy conservation and green construction.

Arriving from Friday, Aug. 23, through Sunday, Aug. 25, the new and returning students assigned to live in Dragon Hall will see a structure built into the side of the hill and attached on the first and third floors at each end to Hayes and Hendrick Halls. The facility was designed to hold 229 students and a hall director.

A side-by-side pair of elevators on the end nearest Neubig Road will make life easier for staff and custodians with card access to move furnishings among the three buildings. The students will live on the ground floor and first through fourth floors. A penthouse contains the heating, ventilation and air conditioning equipment.

Residents in the quad-style rooms on the ground and first floors will share one lounge and kitchen area while the remaining occupied floors contain their own lounges with kitchens. Much like Glass Tower Hall, four students will live in each quad, sharing the two bedrooms and a bathroom and vestibule-sized common area. Each quad unit features an extra, multipurpose sink and countertop.

“Three floors contain a designed triple,” noted Jean Brown, associate director of housing and operations for Residence Life and Housing. “I predict these will be popular rooms.”

The building is fully accessible from the Smith and Casey Halls parking lot, and each floor has one unit that features complete access — easily identifiable by the front door peephole placed so a resident can look through it while using a wheelchair. All remaining suites may be modified readily for accessibility as well.

Drinking fountains in Dragon Hall feature a second spigot designed to fit neatly into the neck of a water bottle, giving students an opportunity to refill their empty water bottles rather than buy new ones by the case from the store. It’s another way students can live a sustainable college life.

“If that’s popular, maybe we will want to retrofit the drinking fountains in the other residence halls,” Brown said.