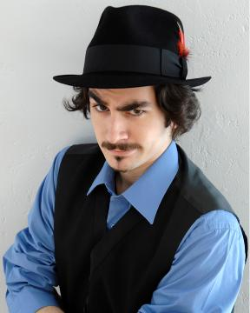 
When a magician performs an amazing trick, audiences know that it must have involved some kind of sleight of hand.

The boundary between reality and illusion walked by stage magicians is similar to the terrain that philosophers have explored for thousands of years. Next week, Brian Miller — a unique philosopher, magician and entertainer — will bridge those two worlds with a special show that blends amusement, amazement and academic acumen.

“Magic, Philosophically Speaking,” a magic show that combines philosophical discussions on reality, deception and free will with jaw-dropping illusions and good humor, will appear onstage in Old Main Brown Auditorium at 7 p.m. on Tuesday, Oct. 4. The show is free and open to the public.

“Students tend to lose place of where philosophy and reality meet,” said Miller, a professional magician who won prestigious academic awards in philosophy while a student at SUNY Oneonta. “The show is intended to make philosophy fun, engaging and down to earth.”

As a comedian and entertainer, Miller shows that deep thinking doesn’t necessarily have to be serious thinking. His stage magic shows and close-up magic performances are laced with stand-up comedy, and that sense of humor carries over into his magical treatment of philosophy.

Miller’s 90-minute presentation aims to encourage interest in philosophy by helping students relate philosophical ideas to real life phenomenon, which he demonstrates through magic. He uses sleight-of-hand demonstrations as an entry for discussions on a variety of topics in philosophy as they relate to magic, including the study of skepticism, free will, lying and deception.

The material in Miller’s presentation is accessible to all levels, from the general public to dedicated philosophy students. His goal is to stimulate a group discussion about serious philosophical topics while keeping it fun, engaging, enjoyable and full of audience interaction.

Miller, 23, is a two-time recipient of the coveted President’s Award from the State University of New York College at Oneonta Undergraduate Philosophy Conference, and is only the second student in the history of the conference to receive such an honor. He graduated from SUNY Oneonta in 2010 and lives in Manchester, Conn.

The show is sponsored by SUNY Cortland’s Philosophy Department, the Campus Artists and Lecture Series, the School of Arts and Sciences Dean’s Program and the Advisement and Transition COR 101 Program.