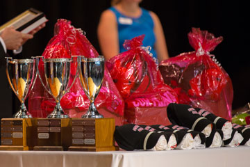 Awards will be presented at Alumni Reunion 2019 in July.

The SUNY Cortland Alumni Association will present its most prestigious honor, the Distinguished Alumni Award, to three graduates during the Alumni Awards Luncheon during Reunion 2019 at noon on Saturday, July 13 in the Corey Union Function Room.

That afternoon, the association will also honor two graduates with the Distinguished Educators Award, recognize one young alumnus, and name an Outstanding Alumni Volunteer.

The 2019 award recipients are:

As a student, Flaster was instrumental in moving the campus radio station from the AM dial to FM in 1976 and establishing WSUC.

After graduating with a degree in philosophy, he stayed in broadcasting and never stopped innovating. He enjoyed a long career in public radio and television, including a role as associate general manager for programming at KPBS in San Diego, Calif. where he was the architect of one of the nation’s first FM news radio stations and he created one of the country’s first combined television, radio and digital media operations.

He now serves as president of Traveling Mind Consulting, a media development and production firm. Flaster has consulted for Marketplace Productions in Los Angeles, the Republic of Moldova and National Public Radio in Washington, D.C.

A group of SUNY Cortland radio station alumni, including Flaster, created the Media Innovation Fund in 2009 to provide funds for current Cortland students to attend conferences and develop media projects. He established the Flaster Family Traveling Mind Scholarship in 2018 to support student educational travel and returned to campus to serve as an Executive in Residence in 2014.

For Gaeta, it all started in a plant anatomy course at SUNY Cortland.

He thrived in the demanding, research-orientated study of plant structure and function and has continued that work as an applied molecular biology lead at Bayer Crop Science in Chesterfield, Mo. The company, which makes products sold globally to the agriculture industry, is a division of The Bayer Group.

In that role, Gaeta is using his expertise in biotechnology to develop gene-editing strategies to improve plants that provide food or other benefits. Ultimately, he wants to strengthen food security in the world by creating sustainable solutions to the many problems facing crop farmers.

He is part of the Emerging Leaders in Science (ELS) program at Bayer Crop Science, has published his research in a number of biology journals, review articles and book chapters and has presented at conferences around the country.  He received the Technology Recognition Award in Biotechnology from Bayer Crop Science and won an Above-and-Beyond award for developing a genome-editing toolbox.

Gaeta’s shares his passion through a number of volunteer mentorship programs. He leads a campaign for sharing his expertise with early career scientists from major universities through Bayer Crop Science and he has also worked with postdoctoral researchers from the University of Missouri-Columbia on their career goals and development.

Kerner has spent the last 33 years working as a private forensic psychologist in Santa Clara County, Calif. He also lends his expertise to local law enforcement and higher education institutions.

A highly-respected custody evaluator, he is skilled in individual therapy, reunification therapy and co-parenting counseling.

Kerner is a board member at Palo Alto University, where he received both his master’s and doctoral degrees in psychology. He earned the University’s Kantor Medal in 2004 for professional community service and has won its Distinguished Alumni of the Year Award three times.

Until recently, he was educational director for the Association for Advanced Training in the Behavioral Sciences, where prepared thousands of psychologists take the Examination for Professional Practice in Psychology, a licensing exam used in most U.S. states.

Kerner served as an adjunct faculty member at Palo Alto University, Santa Clara University and De Anza Community College. He was assessment coordinator and director of training at the Stanford University Medical Center Department of Psychiatry.

Kerner has delivered presentations at conferences around the country and was a featured guest on NPR in 2017, speaking on “When One Parent Wants to Move Away with the Children: A Discussion of the Issues of Custody and Visitation.”

Kerner’s practice provides psychology services for adults, adolescents and families. He also serves as an expert for the courts in Northern California and has consulted with four police departments in the San Jose area, providing training on substance abuse to officers, evaluating officers involved in shootings, and working with sex crime investigators to develop more effective interviewing skills.

The California Psychological Association recognized him with the Distinguished Contribution to Psychology Award in 2017.

Mangiamele didn’t waste any time putting his degree in business economics to good use. Actually, he didn’t wait for the degree.

During his senior year, the entrepreneur took an idea for a class project, developed a detailed business plan and eventually turned it into Long Island Bagel. The restaurant on Main Street in downtown Cortland became a favorite of both students and locals, doing $500,000 in business it’s first year. Mangiamele oversaw operations as its owner and CEO before selling his interest. The business continues to thrive as New York Bagel.

In 2016, he moved to Fort Lauderdale, Fla., to work for Tesla Motors, the electric automobile company founded by serial entrepreneur Elon Musk. Mangiamele started as a logistics analyst and has since been promoted to senior project manager. He works in a variety of areas at Tesla, including customer satisfaction, delivery, logistics, sales, service and forecasting. T

The company aims to reduce the global carbon footprint through its electric motors and is hoping to make the roads safer through its self-driving autopilot technology.

Mangiamele returned to SUNY Cortland as the keynote speaker for the leadership banquet in 2018.

In the mid-1980s, years before such life-changing American tragedies as Hurricane Katrina and the terrorist attacks of Sept. 11, 2001, Sylves got permission to create an experimental course for his University of Delaware students.

“It was called ‘Politics and Disaster’ and no political science department in any U.S. school or university had ever offered such a course,” recounted Sylves, who majored in history as an undergraduate. “People said to me, ‘Who would ever take that? Who cares about disasters?’”

The catastrophic events of the past several decades, coupled with the pervasive and instantaneous media coverage they’ve received, have validated Sylves’ prescient academic interests. A professor emeritus in political science and international relations at University of Delaware, where he has served since 1977, Sylves remains one of the nation’s foremost experts on the subject. His sixth book, Disaster Policy and Politics: Emergency Management and Homeland Security, 3rd Ed., was published this year by CQ Press.

His knowledge of presidentially declared disasters and their political ramifications is second to none.

Sylves created a public-access website, funded by the Public Entity Risk Institute, that provides a chronological list of every disaster declaration since President Dwight D. Eisenhower’s first in 1953. His close familiarity with the oft-controversial Federal Emergency Management Agency (FEMA) dates back almost to its origins under President Jimmy Carter in 1979.

“The smartest communities are the ones that have planned for their own destruction,” Sylves has said. “If you plan for the worst-case scenarios, you are better prepared to deal with those eventualities when they occur.”

For the past 18 years, O’Connell has been a professor of outdoor recreation and outdoor education for both undergraduate and graduate students in the Department of Recreation and Leisure Studies at Brock University in St. Catharines, Ontario.

Considered an expert in experiential learning and education methods, O’Connell integrates “hands on” activities into all his classes. He is known internationally for using reflective journals as a teaching tool.

His research into the best practices used by university professors has been supported by grants worth more than $1 million.

O’Connell was honored in 2017 with the 3M National Teaching Fellowship, Canada’s highest recognition for a university professor.

On an international level, O’Connell was named an Honorary Fellow in the Faculty of Education at the University of Tasmania (Australia) from July 2009 to January 2010.

O’Connell has served as a senior staff member for SUNY Cortland’s Outdoor Education Practicum at Raquette Lake for the past 25 years.

When the Parks Alumni House needs a helping hand with painting, snow shoveling or alumni events, Cecconi, a retired Homer schoolteacher, lacrosse coach and volunteer alumnus from Cortland, N.Y., is there.

He is present for every fall and spring cleanup, quietly finishing tasks big and small. Cecconi has organized and led work parties for special projects like painting and staining the barn, repairing the siding and then painting and re-staining the garage. On three occasions, he oversaw a cadre of willing helpers in an effort to organize and clean out the garage.

He is always on hand when Senior Sendoff, Orientation, or Alumni Weekend calls for an alumni ambassador with a cool and organized head and a friendly face.

Currently he’s involved in two major projects to reconnect alumni with the College. The CLax Legends Weekend is a collaborative effort to bring lacrosse alumni back for a yearly get-together and to recognize the contributions they have made. Cecconi also is organizing the Delta Kappa Beta (1925-1991) Reunion for 2019, as he did for the fraternity’s first reunion in 2014.

His boundless enthusiasm for, and dedication to, SUNY Cortland has not gone unnoticed, and two classmates recently nominated Cecconi for the honor.

“All of my volunteer work is considered ‘payback’ to Cortland State for all that it has given me,” Cecconi wrote. “A successful teaching and coaching career, two post-bachelor’s degrees, meeting my wife (Christine Perry Cecconi ’74), establishing lifelong friendships, a sense of self-confidence and access to an overall high quality of life.”