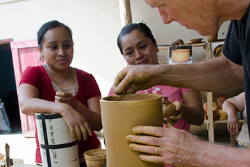 
The ancient Mayas’ rich ceramics tradition tells a unique story translated in the work of SUNY Cortland Art and Art History Professor Jeremiah Donovan. The proof can be found in the highly competitive National Endowment for the Arts (NEA) funding that he recently was awarded.

Donovan, who is widely recognized for his work with international cultures, will receive an “Art Works” award from the NEA for a project showcasing the ceramic traditions of Belize — more specifically the contemporary pottery from the San Antonio Women’s Cooperative (SAWC), a small community of Maya descendants inspired by its cultural past.

Some of the funding will pay for a group of women from San Antonio, a completely rural village centrally located on the western border of Belize, to visit SUNY Cortland and share their unique stories in October 2016.

“This award deals with a multidimensional idea that received support from many different groups — not only the Art and Art History Department, but also the Research and Sponsored Programs Office,” said Donovan, who began taking students to Belize in 2013 after building a similarly successful program in China. “The NEA is the gold standard in the art field, so it’s special for SUNY Cortland to be recognized in this way.

“I think the NEA recognized the interdisciplinary strength of the proposal. The project covers disciplines such as art history, archaeology, anthropology and even geology. It’s going to resonate with the public on many levels.”

The interdisciplinary project, which will begin unfolding during the spring semester, includes four major activities. Throughout the project’s duration, the ceramic artwork created by the SAWC will be highlighted alongside ancient Maya pottery from the collection at Cornell University’s Herbert F. Johnson Museum of Art.

SUNY Cortland’s Dowd Gallery will host an exhibition in Fall 2016 as well as public workshops led by the SAWC demonstrating the painting techniques associated with polychrome pottery. The ceramic painting technique is recognized for being narrative in style. It also serves as a main research focus for Donovan.

“When I met the women, they had been making ceramics but they never really had any guidance,” said Donovan, recalling his first interactions with SAWC in 2012. “Ceramics in the Maya world are recognized as one of the greatest achievements in history … viewed as being one of the highest forms of artistic expression in palace courts of ancient times.”

The project’s second component will involve a high-quality catalogue tracing the rise and fall of these ceramic traditions and highlighting the reinvention of those traditions by SAWC. Besides Donovan, distinguished archaeologist Jaime Awe, of Northern Arizona University, and anthropologist John Henderson, of Cornell University, will offer contributions.

“At the same time, we wanted the women to reinvent the narrative so that they’re telling their own stories … not just making copies, but translating the old work into their own creative processes,” he said.

During their visit to Cortland, the Belizean artists will collaborate with Donovan and representatives from the Herbert F. Johnson Museum of Art to lead an interactive, hands-on educational lesson on the culture of the Maya for students and teachers from Groton High School, one that will involve visits to the museum and artist-led workshops.

A public program day featuring demonstrations by members of the SAWC and a ceramics lecture by Ananda Suarez Cohen, of Cornell University, also will take place at the museum next fall.

Before the NEA-funded project gets underway next semester, Donovan will accompany a small group of students to Belize at the end of December for a winter study abroad trip that has become a staple in SUNY Cortland’s international education. Just like the award-winning project, their academic disciplines will extend beyond art and art history to majors such as archaeology, geology and sociology/anthropology.

“As much as we’re working with and teaching the people of Belize, the benefits for us — for our students — are immeasurable,” Donovan said. “The experience is transformative, and it’s forever.”

He foresees the October visit from the SAWC artists making a similar impact on the campus community.

“These women are regaining and preserving a traditional past while also seeking to better their lives,” he said. “What they’re doing is inspirational in that regard.”