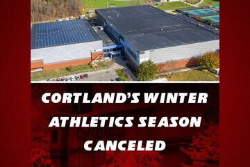 
The presidents of the State University of New York Athletic Conference (SUNYAC), taking caution to protect the health and safety of students and staff and after consulting with conference leadership, have made the difficult decision to cancel winter sports for the 2020-21 season.

While no competition will be held, there is still hope that other team activities and practice sessions will be able to be conducted. Those decisions will be made as the fall semester winds down and the spring semester begins. No decision has been made yet regarding Cortland's spring athletic seasons.

"This was not an easy decision and I empathize with all of our student-athletes across the SUNYAC," said SUNY Cortland President Dr. Erik Bitterbaum, the chair of the SUNYAC Presidents. "However, despite our best efforts to plan for a winter season, our priority must be the health and safety of everyone involved with intercollegiate athletics, and our campuses as a whole."