Scholar to Predict 2012 Election at Roundtable 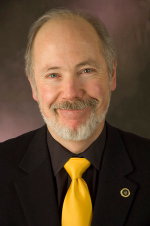 Robert Spitzer, a SUNY Cortland distinguished service professor and a frequent political commentator on national politics, will predict the outcome of the U.S. presidential race an entire year before the 2012 election.

Spitzer, a nationally recognized authority on political subjects including the U.S. Constitution, the U.S. presidency, and the politics of gun control, will present “Looking Toward the 2012 Elections” during a Community Roundtable on Thursday, Nov. 3, at SUNY Cortland.

Predictions for the Republican primary and general elections, along with a discussion about the issues that will shape them, will be offered from 8 to 9 a.m. in the Park Center Hall of Fame Room. A question and answer session will follow. Refreshments will precede the lecture at 7:45 a.m.

Sponsored by the President’s Office and the College’s Field Experience and School Partnerships Office, the Community Roundtable is free and open to the public.

“The first thing I’m going to say in my talk is who I think is going to win,” said Spitzer, who has appeared on national television news shows that include NBC’s “Today Show” and ABC’s “Good Morning America” and has been quoted by the New York Times, the Washington Post and other major newspapers.

He also will recap how the election has been shaped and how he thinks it will play out.

“There’s been a lot of focus on the Republican debates and the political jockeying of the Republican candidates,” he said. “Most of it means little because no votes have been cast yet. None will be cast until January.”

The economy, healthcare and foreign policy include some of the election issues that Spitzer will address.

“The economy will be the number one issue next year in the election, without question,” Spitzer said.

Most of Spitzer’s election-related predictions, however, will be kept quiet until the Nov. 3 roundtable.

“I have some very specific predictions about what I think will happen, which I don’t want to tip my hand on,” he said.

Spitzer is a regular panelist on “The Ivory Tower Half Hour,” WCNY-TV’s popular public affairs program, which airs every Friday night. He is also a regular contributor to the Huffington Post.

On Jan. 12, he appeared on MSNBC’s “Countdown with Keith Olbermann” to discuss gun control proposals in light of the Tucson, Ariz., shooting of U.S. Rep. Gabrielle Giffords and 18 other people at a public meeting.

The Community Roundtable series provides programs on diverse intellectual, regional and cultural topics of interest to College faculty, staff and community members. This year, the number of roundtables has been reduced to reflect the merger of the Center for Educational Exchange with Field Placement to create Field Experience and School Partnerships Office. Two more roundtables are scheduled this academic year. They will take place on the first Thursdays of April and May.

Parking in the Park Center lot is open to the public during the roundtables. For more information, contact the Field Experience and School Partnerships Office at (607) 753-4214.