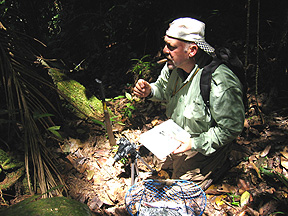 Sitting in front of a campfire on a cool August night on the highest peak in Belize, Doyle's Delight, Dr. Timothy J. Baroni, slowly smokes a well aged Dominican cigar and reflects back over the years of training and hard work that brought him to this point in his life. Just hours before the British Military Air Force had made three Huey Helicopter drops on the peak, shuttling supplies, equipment, 10 scientists and one reporter. Because it had never been studied before and held promise to yield scientific novelties in plants, animals and the fungi they would spend 7 days studying the biology of this cloud forest environment. What and how many new species of fungi Baroni and his two other mycological colleagues, Drs. D. Jean Lodge and Daniel L. Czederpiltz, would find during this expedition, only the next several days would tell. Baroni had spent the last 10 years with his friend and collaborator Dr. D. Jean Lodge, USDA – Forest Service, securing funding from the National Science Foundation to study the biodiversity of fleshy fungi (mushrooms, boletes, polypores, corals, etc.) in the Caribbean, mostly on the islands of Puerto Rico, Hispaniola (The Dominican Republic), Jamaica and St. John US Virgin Islands and recently in Belize, Central America. Working not only with Dr. Lodge and colleagues from around the world, but also being able to train undergraduates from SUNY Cortland and graduate students from the University of Puerto Rico in biodiversity research on fleshy fungi in some truly picturesque and biologically rich areas have been highlights for him in his 30 year career of studying these organisms. But how did he get to that mountain top in tropical Belize?

Dr. Baroni admits that biology was not his first love, he was really hoping to break into major league baseball by being scouted in college, and at least play a few years in the minors. But he soon realized that he would be much more successful pursuing his intellectual training, and set his sights on a degree in engineering, which changed to forestry and then eventually biology. After finishing his Bachelor's degree and then a Master's Degree in Biology at Humboldt State University under the guidance of Professor David L. Largent, he headed off to the University of Massachusetts at Amherst to complete his Ph.D. in Botany. However, his introduction to teaching laboratories in Botany while at Humboldt State University, had made a life changing impact on him. He did not realize it then, but he was destined to make a career in the world of education. His training at UMASS under the mentorship of Professors Howard E. Bigelow, Margaret Barr Bigelow and Emory Simmons provided Dr. Baroni with a broad background on the biology of fungi and instilled in him a love for studying these fascinating organisms that burns as brightly today as it did 30 years ago when he began his career. 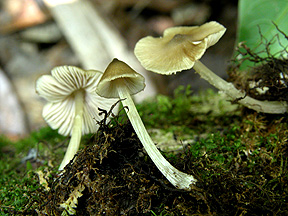 After leaving UMASS, Dr. Baroni took on a one year postdoctoral research experience in the Farlow Herbarium and Reference Library at Harvard University, under the directorship of Professor Donald H. Pfister. His one year of working at Harvard University set the stage for Dr. Baroni's transition into a teaching post at SUNY – Cortland. They needed a mycologist in the Biology Department. He needed a permanent job. Baroni had previously visited SUNY Cortland's Outdoor Education Center at Raquette Lake some three years previous to the teaching post offer, while a graduate student at UMASS. So he did not need much convincing to take the offer from SUNY Cortland to join their teaching staff…the Biology faculty were warm and welcoming, and the possibilities of doing research and developing a field mycology course at Raquette Lake were simply icing on the cake.

So Baroni spent the next 25 years lecturing and training undergraduates in mycology, various disciplines in plant biology, scientific photography and scanning electron microscopy. He has been teaching a summer Field Mycology course at the Outdoor Education Center at Raquette Lake since 1982 and carrying on research at the Raquette Lake facilities as well as elsewhere in New York State, throughout the northeastern states, Southern Appalachian Mountains, the Gulf Coastal States, and California (his native state). The last 10 years have found him ensconced in tropical mycology in the new world, i.e. Northern South America, Central America and islands in the Greater Antilles chain. As those years flowed by Baroni turned out 41 research articles, 41 presentations at local, national and international meetings, 1 book, and has secured 21 grants, totaling nearly $1 million dollars, from local, state and national funding sources to support his research efforts. 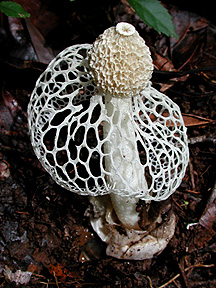 But his love for teaching has been the glue that has held his career together. Besides teaching the required classes, Baroni has worked with 32 undergraduate students in his laboratory and in the field, teaching them through Independent Study and Independent Research projects ranging from basic field observation/collections techniques for biodiversity studies to laboratory related studies in light microscopy, electron microscopy, DNA extraction, PCR amplification, gel electrophoresis, histochemistry, fungal pathology of insects, fungal ecology, lichenology, etc. He must be pretty decent at exciting and engaging his students since he has been given a SUNY Chancellor's Award for Excellence in Teaching (1990) and more recently honored with the Dr. Rozanne Brooks Dedicated Teaching Award (2002) from SUNY Cortland. He has also received a SUNY Chancellor's Recognition Award for Exemplary Contributions to Research and Scholarship (2003) and a College at Cortland Excellence in Research Award (2002). Baroni is passionate when he defends the thesis that excellence in teaching cannot happen without excellence in scholarship, the one nurtures the other.

Dr. Baroni's involvement with the Mycological Society of America, an international organization dedicated to the study of fungi from all scientific pursuits, has also played a major role in his professional life. He has served as chair for several committees for the Society, as Treasurer, Vice President and in 2001-2002 as the President of the MSA. He is very proud of that honor, since the post is an elected one from the 1200 members world wide, and the Presidency usually is bestowed upon an individual from a large Ph.D. granting University. Dr. Baroni appears to have been the first MSA President to serve the society from a solely undergraduate institution.

So how did he end up on that highest peak in Belize collecting his favorite organisms?  He claims he was just lucky and in the right place at the right time. However he also admits that when he came to a branch in the road of life, he always was attracted to the more difficult path, it just seemed more interesting. And as he savored that tasty La Gloria Cubana, he realized that life has so many options, it is up to the individual to choose those that challenge and reward one with the most satisfaction for hard work well done.