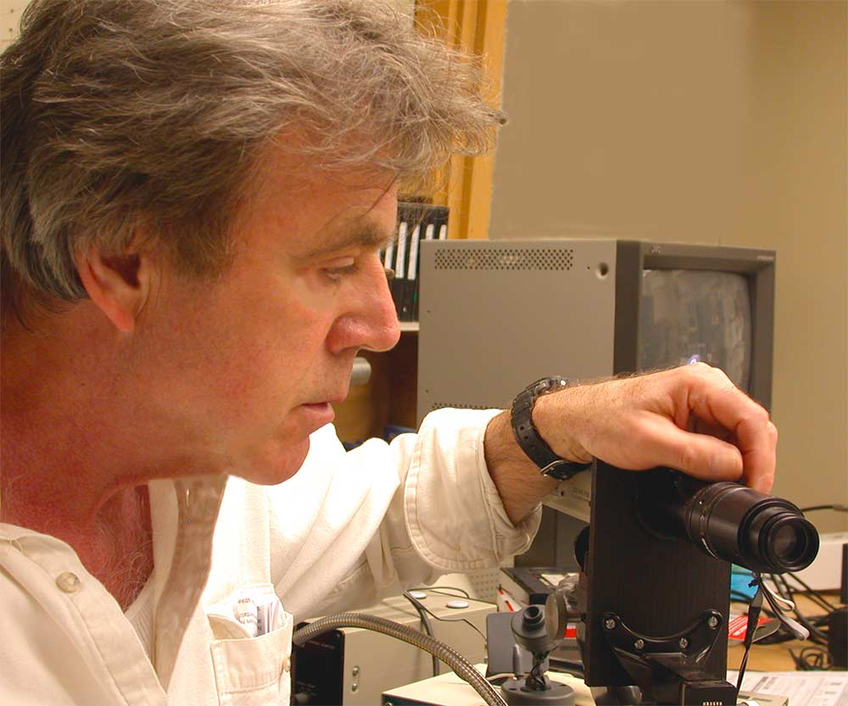 Professor Terrence Fitzgerald discovered a passion that was to become a life-long career in entomology at the end of his sophomore year at SUNY ESF.   Dr.  John Simeone, then chair of the Department of Entomology   arranged a summer research assistantship for him, studying the Balsam Woolly Aphid at the top of Mount Mitchell in North Carolina.  It was a remarkable experience that hooked Fitzgerald on insects.  He went on to finish a master’s degree in entomology at ESF, where he studied the biology of a bark-mining microlepidopteran.  He then continued his studies at Oregon State University in Corvallis, studying the chemical and behavioral ecology of a predator of the Douglas Fir Beetle, receiving a Ph.D. in entomology in 1969. After working for one year as a Forest Service entomologist in Corvallis, he came to Cortland.  "Cortland offered many opportunities to go off in new directions with my research and I decided early on to study the behavioral and chemical ecology of the eastern tent caterpillar. At that time, much had been written about the economic impact of the caterpillar but little was known of its behavior. Within a few years my students and I had discovered that the caterpillars employ a system of trail based chemical communication that enables them to recruit tent mates to food finds, much in the manner of ants and termites.  This was the first instance of recruitment communication reported in a caterpillar and the results of the study were published in the journal Science (Trail marking by larvae of the eastern tent caterpillar )."

Fitzgerald has established a tradition of working with students on tent caterpillars each spring, uncovering many interesting aspects of their behavioral and chemical ecology. Most notably, with the help of chemists at ESF, his team was able to identify and synthesize the trail pheromone of the caterpillar.  The compounds, 5ß-cholestane-3, 24-dione and 5-cholestan-3-one are the only caterpillar trail pheromones as yet identified.  This work has led to current studies that will determine the potential of using one of these compounds to disrupt the communication system of the caterpillar for the purpose of controlling pest populations.  Studies of tent caterpillars have also naturally spilled over into investigations of other caterpillars that live in groups, 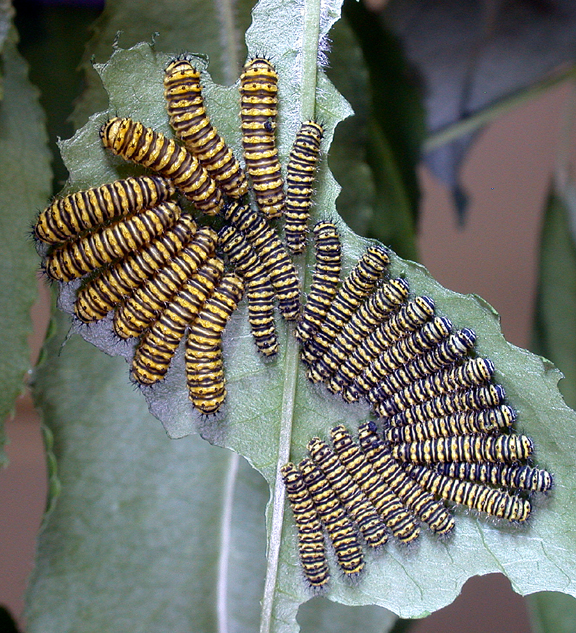 eventually leading to the recognition that these caterpillars were much more behaviorally complex than previously thought.  When he began his studies, the type of  group that gregarious caterpillars live in had been formally classified as an "aggregation", one of the bottom rungs in a hierarchal classification scheme that placed the eusocial insects (ants, bees, wasps, and termites) at the top.  To draw attention to the sophisticated interactions that occurred within colonies of the caterpillars, Fitzgerald began to refer to them in his publications as "social caterpillars." This was a controversial step on his part -- he met with resistance from the entomological community as the term "social"  was largely understood by entomologists to mean "eusocial."  Together with one of his former students, James Costa, he went on to challenge the entomological community to establish a more inclusive system of classifying social insects in a paper titled "Developments in social terminology: semantic battles in a conceptual war " published in the review journal Trends in Research in Ecology and Evolution.  Professor Costa (an entomologist at Western Carolina State University) carried the argument even further in his 2006 volume  "The Other Insect Societies" (Harvard University Press).  The concept of “social caterpillars” now seems well established (as a quick Google search will demonstrate).  To showcase social caterpillars, Fitzgerald maintains a research website (web.cortland.edu/fitzgerald/) which reports on recent discoveries relevant to the biology of these insects.

His investigations of social caterpillars have taken him to a number of study sites around the world; his favorites have been in Mexico, Costa Rica, and  Spain. Studies in Mexico focused on the remarkable caterpillar of the butterfly Eucheira socialis, an insect that spends its entire life cycle in a densely woven silken shelter that hangs suspended from the branches of Arbutus trees in the high mountains.  Also, along with colleague Alfonso Pescador-Rubio, of the University of Colima, he conducted studies of  the thermal ecology of Eutachyptera psidii along the shores of a volcanic lake near Tepic, Mexico and the processionary caterpillar Hylesia lineate in the dry  forests at the Estación de Biología in Chamela.  Most recently, he published a paper, coauthored with  Drs. Pescador-Rubio and Costa, on the discovery of the first instance of a processionary weevil, Phelypera distigma. He also followed up on Jean Henri Fabre’s classical study of the pine 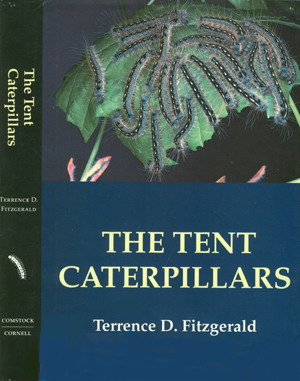 One of his more unusual research endeavors involved an investigation of the biophysics of the mechanics of leaf rolling by caterpillars. With help from his students, Fitzgerald was able to show that these tiny insects are able to generate the largest forces on a per unit mass basis yet measured for any insect.  One of the papers published on these insects ("Leaf shelter-building caterpillars harness forces generated by axial retraction of stretched and wetted silk") coauthored with three students, is one of his all time favorite publications, though it attracted little attention.  More recently, he has been investigating the defensive chemistry of host trees and the ability of caterpillars to tolerate plant toxins.  The focus of these studies has been on cyanogenic trees in the genus Prunus.  This research follows the movement of plant derived cyanide through the digestive tracts of three different species of caterpillars and has uncovered one previously unknown pathway by which the caterpillars avoid being poisoned by the toxin.

Studies of cyanogenic plants were an outgrowth of investigations into the cause of the massive loss of foals in central Kentucky in the springs 2001 and 2002 due to abortions.  At the time of the losses, eastern tent caterpillars were in outbreak numbers and horse farmers reported the caterpillars overrunning their pastures.  It was subsequently shown that the caterpillars were somehow involved in the problem, though, to date, the exact cause remains unknown.   Fitzgerald presented a paper, "The Biology of the Tent Caterpillar as it Relates to Mare Reproductive Loss Syndrome" at a conference sponsored by the Gluck Equine Research Center at the University of Kentucky.   Although plant derived cyanide transferred to mares by caterpillars was considered a possible cause 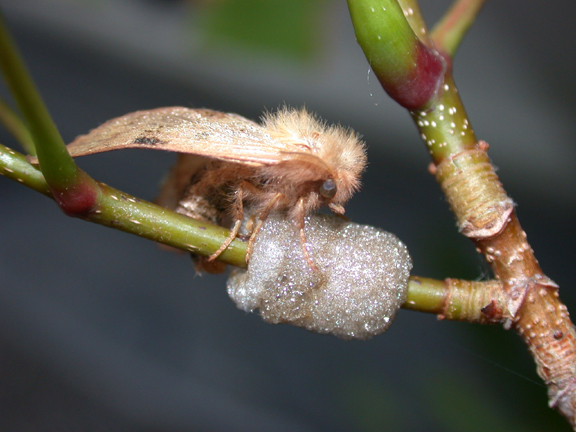 of the abortions, studies eventually showed that cyanide was not involved.  Fitzgerald coauthored a paper on host derived cyanide with student researchers, and Dr. Peter Jeffers of Cortland's Chemistry Department, showing that the caterpillars detoxify cyanide making it an unlikely contributor to Mare Reproductive Loss Syndrome (MRLS).  He also investigated the problem with colleagues and student researchers from the Department of Psychology at Cortland by incorporating caterpillars into the diet of rats in an attempt to develop a small animal model for MRLS.   Histological studies indicated that small fragments of the hairs of the caterpillars lodged in the gut of the rats, raising an intriguing question about how that same phenomenon might affect horses.  An incidental highlight of his MRLS studies was a visit to the Shadwell Farm in Lexington after which he received a letter of thanks from His Highness Sheikh Hamdan Al Maktoum, deputy ruler of Dubai and owner of  the farm.

Fitzgerald is particularly proud of the critical role that students have played in his research.    Since 2000, he has had 21 students involved in research projects in his laboratory, many funded in the summer months by grants. He has been awarded  approximately 30 grants and published over 70 papers.  The bulk of these publications were in technical journals but some of his favorites were non-technical and published in Natural History magazine: “Caterpillar on a Silken Thread” (1983), “Caterpillars Roll Their Own” (1995), and “Night life of Social Caterpillars” (2001).  A research brief and photographs from a grant supported by the National Geographic Society appeared in National Geographic magazine in June, 2000.   In 1995 his volume “The Tent Caterpillars” was published by Cornell University Press.  He has been awarded two Excellence in Research and Scholarship awards and an Outstanding Achievement in Research award from SUNY Cortland. Recognizing a truly remarkable career in research and teaching the SUNY Board of Trustees promoted Dr. Fitzgerald to the rank of Distinguished Professor, the highest rank in the SUNY system, in 1999.