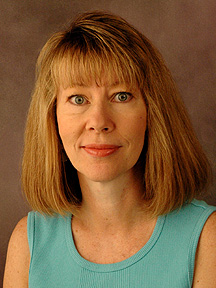 A quick glance at the resume of faculty member Denise D. Knight confirms two things: first, since joining the English Department at Cortland in 1990, Knight has kept busy, very busy.  In addition to teaching full time, Knight has published 15 books, over 51 articles, essays, and encyclopedia entries, nearly 50 book reviews, and has delivered over 40 talks at academic conferences.  The second thing that becomes apparent is that much of that work has been on the American author and socialist Charlotte Perkins Gilman (1860-1935).

Mention Gilman's name, in fact, and Knight is at the ready with facts, anecdotes, and a level of enthusiasm that is difficult to contain. "I knew when I was introduced to Gilman as an undergraduate that she would be with me for a long time.  I was fascinated by her background, captivated by her intelligence, and intrigued by her fiction.  I committed my research to exploring Gilman's life and legacy."

Ten of Knight's books, in fact, have focused on Gilman, including the only full-length study of Gilman's short stories, published in 1997.  A large part of Knight's work has involved the recovery of Gilman's writings, much of which were lost or forgotten after her death.  Knight has been instrumental in promoting scholarly interest in Gilman, whose most famous story, "The Yellow Wall-Paper," is now standard fare in undergraduate literature classes.  That story, based on Gilman's own experience in suffering post-partum psychosis, which eventually resulted in a nervous breakdown, opened the door for Knight to explore other aspects of Gilman's biography.  "One of the things that so amazed me about Gilman was her ability to not only survive her breakdown, but also to emerge from it and to go on to become one of the intellectual leaders of the late-nineteenth, early-twentieth-century women's movement." 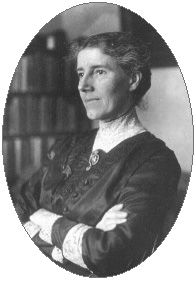 Today regarded as one of the world's leading experts on Gilman's life and literature, Knight has found her work to be enormously fulfilling.   One of the highlights came during the summer of 1991, when Knight was working at the Schlesinger Library at the Radcliffe Institute on a two-volume edition of Gilman's diaries, which she published in 1994.  "One day a research assistant walked up to me and asked if I would like to see Gilman's death mask.  `Her death mask?' I responded.  `There's no death mask listed on the inventory of holdings.'  `Yes, it's a well-kept secret,' she replied.  Twenty minutes later, I was holding Gilman's death mask in my hands.  The detail was incredible.  I could see every pore on her face and every line."  Since Gilman's death was a suicide, committed at the age of seventy-five after the author had battled inoperable breast cancer for three years, the chance to closely examine the death mask was, according to Knight, a once-in-a-lifetime opportunity.  "There was an air of peaceful triumph on her face.  Holding the mask was an experience I will never forget."

Other professional highlights have included getting to know Gilman's descendants, including her grandson, Walter Chamberlin, who resides in New Mexico.   Now in his mid-eighties Chamberlin has visited Knight in her home on numerous occasions.  "Mr. Chamberlin was fifteen when Gilman died, and because he has a fairly vivid memory of the time he spent with her, he has been able to answer a number of questions for me.  His knowledge of the private side of his grandmother is invaluable.  He's one of the few people still left alive, in fact, who actually knew Gilman."

Knight's research also puts her in touch with researchers from all over the world.  "I have had questions from students and scholars in Italy, Japan, Israel, and Africa, and hundreds from Gilman readers and researchers in the United States.  I truly enjoy sharing my knowledge with others who are excited to learn about Gilman."

One of the most gratifying aspects of Knight's work has been to witness the explosion of interest in Gilman in recent years.  In 1993, in fact, Gilman was named by the Siena Research Institute as the sixth most influential woman of the twentieth century.  A year later, at Knight's urging, Gilman was inducted into the National Women's Hall of Fame in Seneca Falls, New York.  "That was a significant milestone," says Knight, who served for five years as president of the international Charlotte Perkins Gilman Society and was interviewed in 1998 on BBC Radio about Gilman's life and legacy.

Knight currently serves as Assistant Chair of her department, as well as Director of the MA program in English.  In 2004, Knight was named as a Distinguished Alumni by the University of Albany, where she earned her doctorate in American literature in 1986.  In 2002, she earned the distinction of receiving two SUNY Chancellor's Awards for Excellence - one for excellence in teaching; the other for excellence in scholarship.  She was also named in 2002 as the first-ever Professor of the Year by the SUNY Cortland chapter of Sigma Tau Delta, the English Honor Society.   In spring 2003, she was invited to give the keynote address at SUNY Cortland's Honors Convocation, which was attended by close to 1,000 parents, students, staff, and faculty members.  She also manages to volunteer her time at the National Women's Hall of Fame, in Seneca Falls, New York, where she has served as both a national judge and as a member of the nominations committee.  In addition, Knight serves on three editorial boards: one for an American literature reference series for the Gale Group, another for the refereed journal, American Literary Realism, and the third for the University of Alabama Press.  She is also a speaker for the New York Speakers in the Humanities Program and has served as an exchange professor at the University of North London in England.  In 2001, she was a Scholar-in- Residence at Washington State University in Pullman, Washington.  She is former director of the Center for Multicultural and Gender Studies at SUNY Cortland, where she served from 1996-98, and she was founder of the Central New York Conference on Language and Literature at Cortland, an international forum attracting participants from as far away as India, Japan, and Australia.  She has been the recipient of two summer stipends from Cortland's Faculty Research Program. An avid lover of wildlife, Knight earned a license in wildlife rehabilitation in 2002.

"It's a busy life," Knight says, "but also a very full one.  I love teaching, and I love the opportunity to conduct and publish research. I simply can't imagine doing anything else at this point in my life."