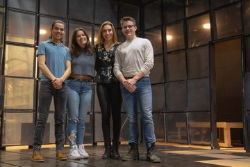 
Sophomore Ian Luchini portrays central character Christopher Boone in SUNY Cortland’s upcoming production of “The Curious Incident of the Dog in the Night-Time,” which opens on Thursday, Feb. 27.

Christopher is a teenage math whiz who decides to investigate the death of a neighbor’s dog while coping with severe sensory and behavioral issues. He soon starts to unravel family mysteries and opens up about his personal challenges with his social worker and teacher at school.

With innovative set and sound design, the play is designed to be viewed in the way Christopher experiences the world. It provides an interesting challenge for the actors, including Luchini.

“You have to picture everything through his eyes,” Luchini said. “That’s beautiful in a sense, rather than having everything given to the audience. It will make people think.”

The play was adapted for the stage by Simon Stephens from the eponymous 2003 novel by Mark Haddon. In 2015, the Broadway production of “The Curious Incident of the Dog in the Night-Time” won five Tony Awards, including best play.

Sophia Rissi, a junior from Manhattan, N.Y., plays Judy Boone, Christopher’s mother. Her perspective on the thematic content of the play has changed since rehearsals started.

“The first time I read it, I thought one thing about this play, but now, being Judy, my whole perspective on this play has changed,” Rissi said. “It’s about a family and dealing with the struggles of Christopher.”

Anthony Acevedo, a junior from Port Washington, N.Y., is Roger Shears, one of the Boone’s neighbors. He was similarly struck by how different he felt about the work after getting on stage and bringing the script to life.

The character of Roger is wrapped up in the various mysteries young Christopher is trying to solve and the two initially share a mutual distrust.

“You read it and you see the black and white, but it’s about having emotions and having to deal with Christopher as a human being and not treating him like most people treat him,” Acevedo said. “It’s really different seeing that. I feel like it’s really educational. Being in it, I learned a lot and I think people watching it are going to learn a lot. It’s cool seeing it from his point of view.”

Nicole Furka, a senior from Massapequa, N.Y., is Christopher’s social worker at school, Siobhan. Her character serves as the play’s narrator and does so by reading Christopher’s own writing of things that have happened in his life. That relationship between social worker and student uncovers an empathy for Christopher that isn’t necessarily expressed by all of the people he encounters.

“She’s such a fun character,” Furka said. “She gets to see through a kid’s life she meets at school. But it’s her reading his book, finding out more details of his life, that breaks her heart as a social worker and as someone so close to him.”

“I think acceptance would be the main thing,” Luchini said. “It’s also the idea of overcoming certain obstacles that individual people may have. We’ve talked a lot with (Associate Professor and Director Deena) Conley about how being on the spectrum is different for individuals.

Tickets are $19 for adults, $16 for senior citizens, faculty and staff, $14 for alumni and $10 for students and are available at Cortland.edu/boxoffice.