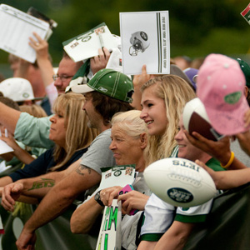 
The New York Jets 2013 Training Camp brought $3.68 million in economic activity to Cortland County this past summer, according to a study led by three SUNY Cortland faculty members.

“These are dollars that would not have been spent in our community otherwise,” said College President Erik J. Bitterbaum. “This report proves what many people already know to be true: the local economic impact of New York Jets training camp is just tremendous.”

In 2012, when the number of public training camp practices was cut in half, high-profile players such as Tim Tebow and extensive coverage from national media outlets such as ESPN made up for an anticipated drop-off in economic impact and attendance. Those factors contributed to a $5.5 million economic impact and 35,634 visitors in 2012.

Some of the 2013 report’s highlights include:

• Training camp visitors created most— roughly 81 percent — of the impact in Cortland County. All but four of New York state’s 62 counties were represented in the training camp’s attendance figures.

• More than half of the training camp’s spectators attended a practice in Cortland for the first time. Approximately 18 percent of all attendees came from outside New York state.

• Central New Yorkers in Cortland County and adjacent counties contributed 42 percent of the direct spending (more than $684,000) while other counties in New York state accounted for 37 percent (approximately $600,000). Visitors from outside the state added 21 percent ($344,000).

• Although local hotel revenue and occupancy decreased slightly from 2012, both increased from 2011 when training camp was held in Florham Park, N.J., due to the NFL lockout. Hotel revenue increased 9.1 percent and occupancy went up 6.2 percent in 2013 compared to 2011.

Survey data is based on responses from 7,293 people. The final report also highlighted some of the unquantifiable value that comes with training camp.

“The benefits that SUNY Cortland derived from all the media exposure on a state and national level are immeasurable,” the report reads, mentioning coverage by well-known news entities such as ESPN, The New York Times and Newsday.

The benefits that the College receives as the official university partner of the New York Jets also were noted. Those include more than 50 student internships as well as two open houses for prospective students and high school guidance counselors held at the team’s facilities in New Jersey.

The survey’s authors expressed their gratitude to several individuals who supported or contributed to the report, including Bitterbaum; Mark Prus, the College’s provost and vice president for academic affairs; William Shaut, the vice president for finance and management; Michael Whitlock, the director of campus activities and Corey Union; Kevin Pristash, the associate director of campus activities and Corey Union; Mary K. Murphy, the associate vice president of finance; Jim Dempsey, the executive director of the Cortland County Convention and Visitors Bureau; Adam Megivern, the executive director of the Cortland Downtown Partnership; Nicole LaFreniere, a business economics major and AmeriCorps volunteer at the Cortland Downtown Partnership; and a student intern team that collected and analyzed data. That group included business economics majors Keenan Brathwaite, Adam Dimino, Joseph Osuna and Valerie Turner.