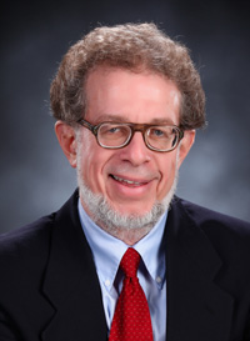 
Thomas Lickona, a developmental psychologist and emeritus SUNY Cortland faculty member who is an internationally recognized leader in character education, recently received an honorary doctorate from the Universidad Anahuac Mexico.

The degree of Doctor Honoris Causa (Honorary Doctor of a Cause), Anhuac University’s highest academic recognition, was presented on March 13 during a ceremony at the university’s Mexico City campus.

Lickona retired from the College in August after 40 years as a professor of childhood/early childhood education, but continues to direct SUNY Cortland’s Center for the 4th and 5th Rs (Respect and Responsibility).

He is one of only six individuals to receive the honor in Anahuac University’s history. The honorary degree is awarded to individuals whose work is judged to have promoted an important cause with far-reaching impact. In celebration of the University’s 30th anniversary, the award was given simultaneously to Lickona and Mauricio Puente, who is regarded as one of Latin America’s most important philosophers.

The university decided to honor Lickona in recognition of his contributions to children and youth as founder and director of the center, his theory of the development of moral conscience, and his project of character education in schools, explained Jorge Lopez Gonzalez, Anahuac University president.

“Your name will remain forever recorded in the history of our institution, next to other great names such as (influential Polish leader) Lech Walesa — persons who, like you, leave their imprint on history by always following their vocations and making great contributions to humanity,” Gonzalez said in his letter inviting Lickona to the ceremony.

“Character education is hope on the horizon,” Lickona said in his acceptance speech. “It has the potential to bring families, schools, youth organizations, faith communities, and the government together in a common cause. The well-being of our individual countries and the welfare of the whole human family in the century ahead depend on how seriously all of us commit to this calling.”

“(Lickona) is a psychologist recognized worldwide for his innovative approach to character education,” said Professor Elena Barrero, director of Anahuac University’s School of Psychology, explaining the reasons for Lickona’s selection. “His center’s promotion of respect and responsibility has had impact on educational institutions, both public and private, in the U.S. and beyond.”

“It really was an inspiring week,” Lickona said. “I had a chance to be a part of the university for that week.

“I felt humbled and deeply honored and it came as a total surprise,” Lickona said more recently about learning of the intended recognition.

Barrero, Lickona notes, spent a day at the Center for the 4th and 5th Rs with Lickona last July, ostensibly to research ways to incorporate character education components into Anahuac’s evolving Psychology Department programming. In fact, she also was evaluating Lickona for the honorary degree. On the day of the ceremony, she offered a personal reflection about reading Lickona’s book, Raising Good Children, as a first-time expectant mother.

Lickona never taught at Anahuac University, but high school and university educators in Mexico have taken a great interest in his Smart and Good model in their character education and he’s worked closely with many of them.

“I had made approximately a dozen trips to Mexico going back to the early 1990s,” Lickona said. “I’ve had 12 to 15 speaking engagements in the country and have conducted seminars there. I’ve done some work with public schools in the state of Guanajuato and we’ve had some of the universities use our smart and good model in their character education.”

Many faculty members and teachers in Mexico have read his books, and more are likely to do so now that two of his published English language books will soon be available translated into Spanish: Character Matters, available since 2010 in Spanish, and Smart and Good High Schools (with Matthew Davidson), to be released in translation in July.

Lickona also is the author or editor of other books on moral development and character education, including Moral Development and Behavior; Raising Good Children; Educating for Character; and Sex, Love and You (with Judith Lickona). Educating for Character received a 1992 Christopher Award for “affirming the highest values of the human spirit.” An abridged Spanish language edition of that book was published.

Lickona joined SUNY Cortland in 1970 to direct a federally funded teacher education program, “Project Change,” which won a national award for excellence in teacher education. From 1978 to 1980, he served as a visiting professor at Harvard and Boston Universities.

In 1994, Lickona founded the Center for the 4th and 5th Rs. Its Summer Institute in Character Education has since trained more than 5,000 educators from 40 states and 20 countries. The center’s work was the subject of a New York Times Magazine cover story, “Teaching Johnny to Be Good.”

In 1996, Lickona was invited to speak at the White House Conference on Character-Building for a Democratic and Civil Society. In 2001, the national Character Education Partnership named him the recipient of the “Sandy” Award for Lifetime Achievement in Character Education.

In the course of his 40-year career at SUNY Cortland, Lickona has obtained more than $2 million in foundation and federal grants in support of his work.

Lickona retired last August but continues to direct the center part-time. Its education letter, excellence & ethics, is co-edited by Lickona and Marthe Seales, the center’s office manager, and is distributed to educators around the world. The newsletter is available free on the center’s website, www.cortland.edu/character. The most recent issue focuses on 20 ways to prevent school bullying.