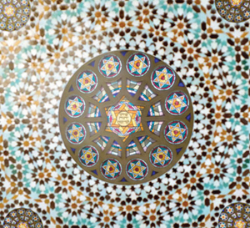 
SUNY Cortland will look at Jewish-Muslim relations in a new light, through similarities that bind the religions, when a visiting artist and professor emeritus speak at the Dowd Gallery in downtown Cortland on Tuesday, Oct. 9.

“New Ways of Seeing: Jewish-Muslim Relations” begins at 5 p.m. at Main Street SUNY Cortland, located at 9 Main St., on its third floor. The event, which is free and open to the public, highlights the work of Shari Diamond, a Brooklyn-based artist who seeks to highlight the similarities between Jewish and Muslim faiths through photographs.

The joint lecture is part of the “Remembered/Re-imagined” exhibition, which runs until Saturday, Oct. 20.

Diamond will discuss the intersection of art and politics in her work. She maintains that her work was inspired by a group of Muslims who during World War II and the German occupation of France risked their lives to rescue many Jews in Paris.

The artist digitally combines large-scale photographic imagery of synagogues and mosques in Paris and Istanbul to seek out and highlight similarities between the two groups.

“These seamless montages dissolve borders and create new spaces in which reimagined realities of coexistence, respect and exchange are possible,” Diamond explains. “The ceremonial implements and symbols unique to each religion, along with its distinctly attired followers, appear before the viewer in unity under one roof.”

The College’s Dowd Gallery has moved to a temporary location and will be based on the third floor of Main Street SUNY Cortland for approximately two years while the Dowd Fine Arts Center undergoes renovations.